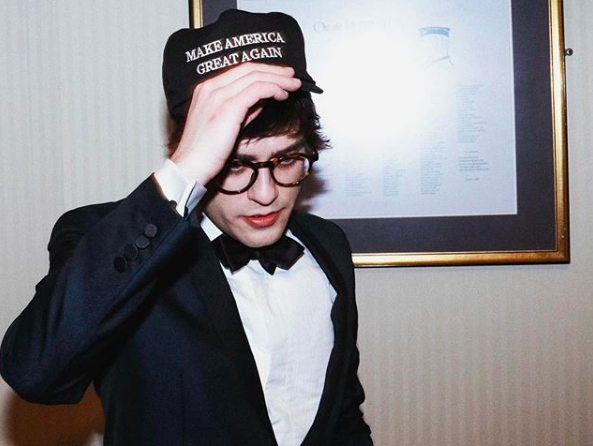 Lucian Wintrich is out of a job that found him with unlikely White House press credentials after appearing on a podcast alongside a white supremacist, The Daily Beast reports.

While his departure from the right-wing blog Gateway Pundit may have been in the works for some time, the timing is raising an eyebrow or two.

A little backstory: In 2016, Wintrich launched “Twinks4Trump”, a photo project that featured pictures of skinny white gay men posing naked to show their support for the Republican billionaire who couldn’t care less about them.

In 2017, Wintrich was arrested after getting into a physical altercation with a student at the University of Connecticut.

The 29-year-old was giving a speech about why “it’s OK to be white” when he jumped off the stage to chase after a heckler.

After violently grabbing the young woman, he was detained and later released without charges being brought.

“I try and pay as little tax as possible, because I hate what they do with my tax money. I hate the way they spend our money.”- Donald #Trump #Twinks4Trump #MakeAmericaGreatAgain #Trump2016 ??

After that, Wintrich landed a gig with the alt-right blog Gateway Pundit, where he was given an official White House press pass, which he took full advantage of.

Gateway Pundit announced Wintrich is no longer working for the site and it may or may not have to do with the recent appearance he made on a podcast alongside white supremacist Nicholas Fuentes.

During their chat, the guys discussed the “genetic difference between races” and claimed the U.S. was “specifically saying we want the sh*ttiest immigrants in the entire world to flood our country.”

"I will be the greatest jobs president that God ever created." – Donald #Trump #Trump2016 #Twinks4Trump #MakeAmericaGreatAgain ??

“I’d like to wish Lucian Wintrich the best of luck and blessings on his next endeavor after leaving Gateway Pundit several weeks ago,” Gateway Pundit chief Jim Hoft tweeted.

It remains to be seen where he’ll lands next, though we wouldn’t be surprised if he ends up peddling vitamins on satelite radio alongside archnemesis Milo Yiannopoulos.

UPDATE: An earlier version of this post suggested a more definitive link between Wintrich’s podcast appearance and his departure from Gateway Pundit. It also stated his 2017 arrest resulted in being released on $1,000 bail. Wintrich wrote into Queerty to dispute these and other claims.

Below is his full response:

“-I am not “alt-right”, I have never claimed to be such and have repeatedly disavowed them.
-I was not stripped of my press credentials, I left DC in May for New York.
-I left Gateway Pundit in late May, months before that podcast appearance as my former employees Tweets and statements have attested to.
-The Twinks4Trump models were not all Trump supporters, they were simply models who found humor in the project
-I was never in jail, I was briefly detained and released an hour later without bail, all charges were dropped
-The female protestor who grabbed my speech was arrested a few weeks later and released after pledging 500 to the university.
-Even the ADL said the okay-gesture is not ‘white supremacist’”