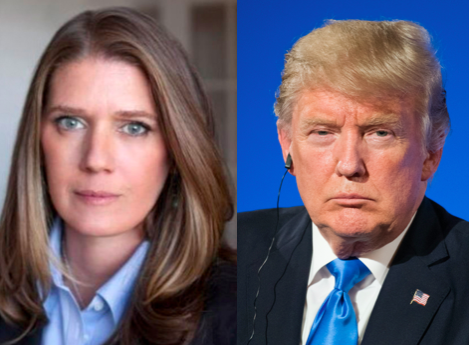 Donald Trump‘s niece Mary is gearing up to publish a juicy tell-all book about her uncle. “Too Much and Never Enough: How My Family Created the World’s Most Dangerous Man” isn’t due out for over a month and it’s already hit #5 on Amazon’s bestseller list.

In the lead up to the book’s release, a Twitter account called @unRealMaryTrump has sprung up and it’s already amassed over 70K followers in very short period of time. When you read some of the tweets, you may understand why.

Let’s take a look, shall we?

It’s a well-known fact that Donald Trump is a notorious germaphobe who finds bodily functions disgusting and cannot share a bathroom with anyone, not even his own wife. Tapping into this unique quirk of his, @unRealMaryTrump tweeted yesterday:

The reason for my uncle's surprise visit to Walter Reed is because he can no longer control his bowels.

It's why he stands the way he does. It's why he lurched down the ramp at West Point.

He spews excrement from both sides.

Oh, but she didn’t stop there…

Everyone thinks #COVID19 was responsible for the national shortage of toilet paper.

Now, poo jokes may seem crass and immature, and normally they are, but this is Donald Trump we’re talking about, a man with the emotional maturity level of a middle schooler and who has a long history of criticizing other people’s bathroom habits.

@unRealMaryTrump also talked about Trump’s cameo in Home Alone 2 and how he was allegedly supposed to appear in Harry Potter but then, well, we’ll let her tell you…

But he was almost in Harry Potter, too.

He pestered Universal for weeks about letting him in the movie. They relented, actually.

But ultimately had to be removed from the set for insisting on being called Grand Wizard.

And the normal hand size. https://t.co/mMyMLyO99s

And here she is commenting on his weight…

That actually was a bit of a cruel joke from his inner circle staff.

They filled his glass with Holy Water.

It was burning his hand, so he was struggling to lift it. But the cameras were on. So, obviously, he had to follow through.

Did a number on his bowels that night. ? https://t.co/q5YHtMaYML

And here she is remarking on his personal hygiene habits…

Uncle Donald has not cut his toenails since Thanksgiving '99.

Then the world didn't end.

So now he's trying to end it for us.

All because he gets winded touching his feet.

I was asked why Jared is accepted into #Trump's inner circle. His soft demeanor clearly doesn't fit with the family.

Poor boy. If only he knew what gets said about him at holidays.

Anyways, it's a long con to acquire 666 Fifth Ave.

Uncle Don wants it for the obvious reasons.

The public is obviously aware of just how bad Melania has it. Living with Donald is a nightmare.

The obvious faults are just that— obvious.

But a less obvious irritant is the discoloration that occurs on furniture and linen.

It's like every seat is covered in Cheeto dust.

Now, if you’re still wondering whether this is real and if Mary Trump the author is actually tweeting these things, this should clear up any confusion…

It says right by her name …UN REAL Mary Trump

But does it matter? https://t.co/37KKgTzzDd

It’s unknown who exactly is the mastermind behind @unRealMaryTrump’s account, and, honestly, with the number of enemies he’s made in Washington, it could be anyone. But if this is just her warming up, we can only imagine what more she has in store.

Related: Damning new ad takes aim at Trump’s most sensitive subject: his own health and stamina