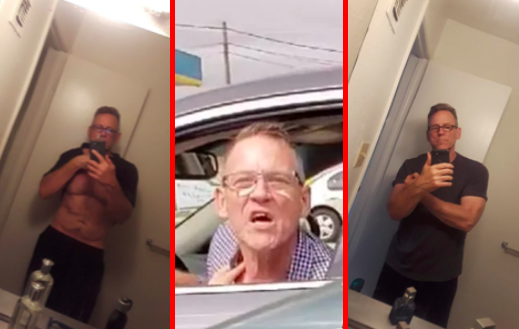 Janet Espejel was driving with her toddler-aged daughter to the early voting polls last week when an enraged middle-aged white man pulled up beside her at a red light and began shouting racist and misogynist remarks her way.

“You’re driving in two lanes, you stupid b*tch!” the man can be heard screaming in a now viral video. “That’s not how we drive in America. Trump’s deporting your stupid cousins today, b*tch!”

“You’re ugly, you need a gay friend to help you with makeup and clothes!”

Can we make this pleasure of a guy famous? Twitter is good at taking down racists. Took place in Houston. @MollyJongFast @krassenstein @EdKrassen @MattNegrin pic.twitter.com/Bbh5BpFfRP

After the video went viral, it didn’t take long for internet sleuths to identify the man as 58-year-old Charles Geier, a proud gay Trump supporter who many have nicknamed Houston’s “Toothless Racist” due to his missing front tooth.

After being doxed, Geier deleted his social media pages and appears to have gone into hiding. Naturally, Twitter still has a lot to say about him.

#CharlesGeier needs to not be gay. We don’t want him.

https://t.co/8GlsSZnWGQ
Charles Geier was driving around & saw a woman who did not look just like him & decided it would be good to scream at her & her toddler daughter to get out of “his” country. I don’t know about others, but I would sure rather *he* left.#BathroomSelfieGuy

#CharlesGeier will be the next person apologizing to the world claiming that what we saw in the video does not reflect the human being that he is today and blah blah blah ? Seen it a million times before. https://t.co/FtXxsLeGYx

First off #CharlesGeier, would think a gay man. might have more tolerance towards others in a minority. I’m sure you have had your share of name calling, and I’m sorry you are bitter, but passing that bitterness on is unexcuseable. Second, try using a signal to cut across lanes

Yes! Twitter detectives have identified him as Charles Geier. His FB is filled with bathroom selfies of his abs. He’s very taken with himself.

Didn’t take #CharlesGeier long to lock down his FB page….lmao

Wonder how long it will take for darling #CharlesGeier will play victim now. Wonder if he knows he’s gay and Trump ain’t on his side.

I wonder what it’s like to be evicted from your own country? #CharlesGeier

Very appropriate name for him. “Geier” is the German word for “vulture.” #CharlesGeier

#CharlesGeier Shame on you! Why do you think it’s okay to treat people like this? Your values suck…

Be gone #CharlesGeier
The LGBT community doesn’t like you and we sure as hell don’t accept you, BITCH!