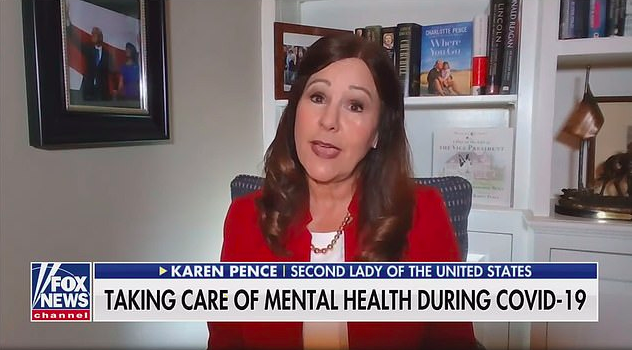 We don’t hear too much from Karen Pence, but when we do, it’s almost always something vapid, defensive, and/or judgmental (usually towards LGBTQ people).

After Vice President Mike Pence was criticized this week touring the Mayo Clinic without a mask, which was not only irresponsible and set a terrible example, but went against the hospital’s official policy, Mother Pence went on Fox & Friends to defend her husband’s indefensible actions.

“As our medical experts have told us, wearing a mask prevents you from spreading the disease,” Karen Pence said this morning, “and knowing that he doesn’t have COVID-19, he didn’t wear one.”

Related: The only woman Mike Pence is allowed to dine alone with is his wife

“It was actually after he left Mayo Clinic that he found out they have a policy of asking everyone to wear a mask,” the Second Lady blatantly lied.

The @MayoClinic told reporters it “shared the masking policy with the VP’s office" before his arrival. Karen Pence says Mike Pence didn't find out about it until after he left. So either someone is lying or Pence's staff didn't do its job. https://t.co/0GpxVsQMj0

Evidently, Karen missed that line in the Bible that explicitly says “Lying lips are an abomination to the Lord.”

Business Insider was quick to report that Mother’s explanation directly contradicts the Mayo Clinic’s claim, which tweeted (and later mysteriously deleted) that it had informed Pence about its mask requirement prior to his visit.

Karen Pence said her husband didn't know of Mayo Clinic mask policy until after he left.

The fact that EVERYONE ELSE WAS WEARING A MASK might have been a clue.

These people think that Americans are as stupid as they are and will fall for this shit.https://t.co/JCGIaumb3v

BREAKING: Karen Pence says Mike didn’t know about the hospital regulation of wearing a mask during his tour. That is a lie. Pence and his staff were told by the hospital it was mandatory. Pence should be removed from the coronavirus task force. Pence failed us all.

You know Mike Pence is screwed when we’ve got Karen Pence on TV lying about the Mayo Clini, in a last ditch attempt at turning the mask story around, and all anyone can do is laugh at her for it. Oh Mother.

All of us who traveled with him were notified by the office of @VP the day before the trip that wearing of masks was required by the @MayoClinic and to prepare accordingly. https://t.co/LFqh27LusD

Pence himself defended not wearing a mask on Tuesday, saying he’s regularly tested for coronavirus and doesn’t have it, so the mask wasn’t necessary, regardless of what the Mayo Clinic says.

Because what do they know, right?

The VP added that wearing the mask also blocked his vision and he wanted to be able to look medical professionals “in the eye.”