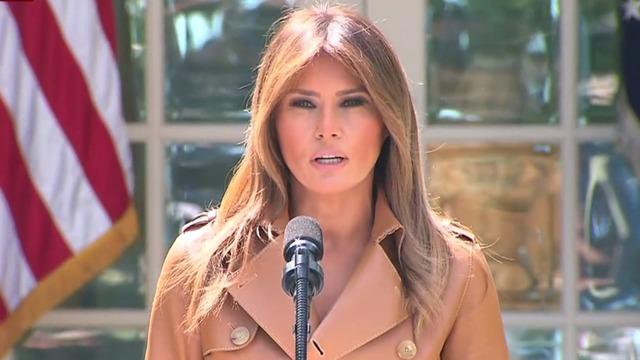 Nearly a year and a half since becoming First Lady, Melania Trump has finally launched her online cyber bullying/opioid epidemic/WTF-is-going-on-here initiative, and it’s as messy and all over the place as you might expect.

This week, Mrs. Trump announced her 2018 #BeBest campaign, not to be confused with Michelle Obama’s 2016 #BeBetter campaign:

In addition to the video, the #BeBest campaign includes an online booklet, which is literally a direct copy of an Obama administration pamphlet published in 2009 on how to talk to kids about online cyber bullying… with Melania’s name slapped on it, of course!

When confronted with accusations of plagiarism, the First Lady’s office said:

Despite providing countless outlets with ample background, information, and on-the-record comments from the FTC, some media have chosen to take a day meant to promote kindness and positive efforts on behalf of children, to instead lob baseless accusations towards the First Lady and her new initiatives

Fun fact: The White House trumpets “Talking with Kids about Being Online" as "a booklet by First Lady Melania Trump and the Federal Trade Commission." Except for an intro, it's exactly the same thing Obama's FTC put out. pic.twitter.com/AEf6F0gBbt

Your work and legacy carry us forward, against all odds.

What’s next? Are you going to launch a program to deal with violence in Chicago and how growing up as a black woman in America shaped your outlook? #birthertrash

Be a model for children and LEAVE HIM

You know what would #BeBest? Impeachment. pic.twitter.com/Ny0q6CyloC

If you're concerned abt kids well-being & trying to combat bullying, opioid use, etc., why use a phrase that initiates competition? Why not "Be YOUR Best" or "Be Better" (as in better yourself everyday). "Be Best" seems to encourage kids to try to beat each other/win @ all costs

It would #BeBest if you would just divorce him.

Sixteen months and all you could do was to republish a booklet from Obama administration word for word? When will any of you be held accountable? #StopLying