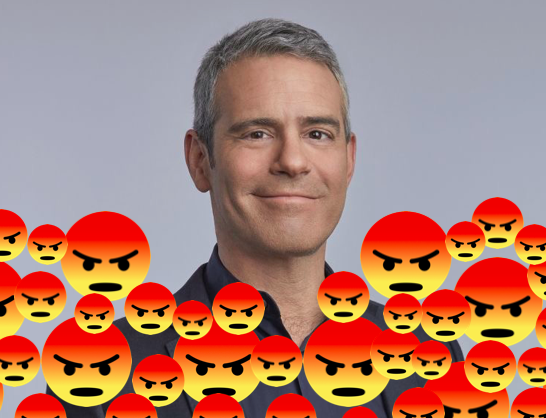 Andy Cohen surprised everyone when he announced on Thursday night’s episode of Watch What Happens Live! that he’s expecting his first child via surrogate in 2019.

“If all goes according to plan in about six weeks time I am going to become a father thanks to a wonderful surrogate who is carrying my future,” Cohen said.

Most people have been over the moon for the 50-year-old dad-to-be, tweeting out mazel tovs, well wishes, and congratulations.

But not everyone wants to share in Andy’s joy.

Just like when people trashed Tom Daley and Dustin Lance Black after they first announced the birth of their son earlier this year, bitter Twitter trolls have been coming for Cohen, too. And the things they’re saying are pretty awful.

I wonder if Andy Cohen is going to pimp out his new child like he does the women at Real Housewives. ?

@Andy it’s pretty fucked up you’re using a surrogate with your unlimited influence and resources when there are millions of helpless children world wide that would love a home. God forbid you don’t have a miniature version of yourself to play dress up with. #Bravo ?

This is just wrong

Andy Cohen is 50 years old, which means he will be 69, geriatric, and on Social Security by the time his child is in high school. All you people who gave Kenya Moore crap for having a baby at 47 STAY THE FUCK OUT MY MENTIONS

What’s the politically correct way for me to say that Andy Cohen’s pregnancy grosses me out & feels immoral af? I’m trying not to alienate any more of you guys.

I didn't care when Andy Cohen announced he and Anderson Cooper got banged by the same guy, and I really don't care that he's having a baby and becoming a "daddy" through surrogacy or any other means. Really. How shallow is your world?

I hope he doesn't get the cocaine and baby formula mixed up. @kathygriffin

Andy, if you’re reading, everyone here at Queerty sends nothing but good vibes and good luck! We can’t wait to see your new bundle of joy!