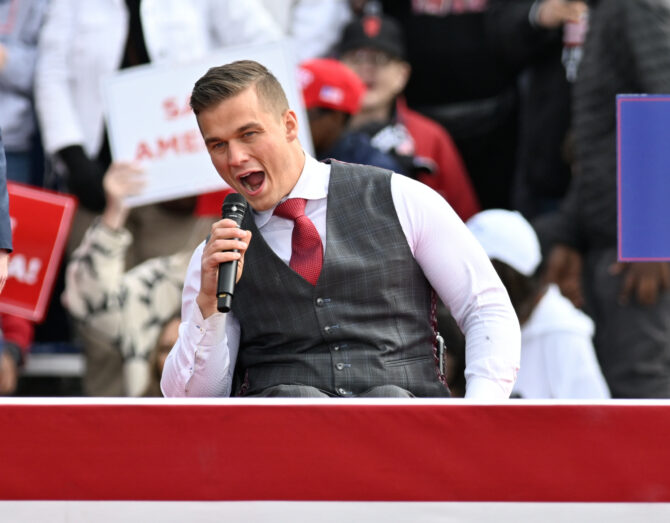 It’s been a truly terrible week for Madison Cawthorn and he only has himself to blame.

The anti-LGBTQ congressman from North Carolina, who is currently running for reelection and faces eight primary challengers, has been trending pretty much every day since Tuesday after a leaked video showing him naked, in bed, with his male cousin began circulating online.

The disturbing video was first shared by American Muckrakers PAC, a political group that runs the Fire Madison Cawthorn website. In it, the young Republican appears to be reenacting some sort of rape fantasy by hooting like a gorilla while thrusting his naked groin in his cousin’s face as another male records the encounter encouraging him to “Stick it in his face!”

Cawthorn responded to the leaked recording on Twitter by saying he was just goofing around then claimed to be the victim of blackmail, although he didn’t elaborate on who was blackmailing him, how long it had been going on, or why.

“A new hit against me just dropped,” he tweeted. “Years ago, in this video, I was being crass with a friend, trying to be funny. We were acting foolish, and joking. That’s it. I’m NOT backing down. I told you there would be a drip drip campaign. Blackmail won’t win. We will.”

The leak comes just days before the North Carolina GOP primary election. Early voting is already underway, and, now, so are the face humping jokes…

Good morning, happy Friday to everyone, or as Madison Cawthorn calls it FaceTime Friday.

Madison Cawthorn really is a fuckface.

I dunno. Maybe a lot of Madison Cawthorn's supporters actually secretly wish they could naked face hump their cousins.

I don’t care that Madison Cawthorn is a cross-dresser who enjoys having gay sex with his cousin.

I care that Madison Cawthorn is a violent creepy unqualified lying gaslighting hypocrite traitor insurrectionist dunce who votes to oppress the LGBTQ community and women.

The Russian Navy is getting pounded like Madison Cawthorn's cousin's face.

Madison Cawthorn's explanation of that leaked video is that he wasn't having sex with a man, he just thought it was hilarious to force his dick in someone's face.

I've never heard anything more reflective of today's GOP than a defense of "Oh, I'm not gay. I'm just a rapist!"

"I did NOT have sexual relations with my Cousin's face." – Madison Cawthorn