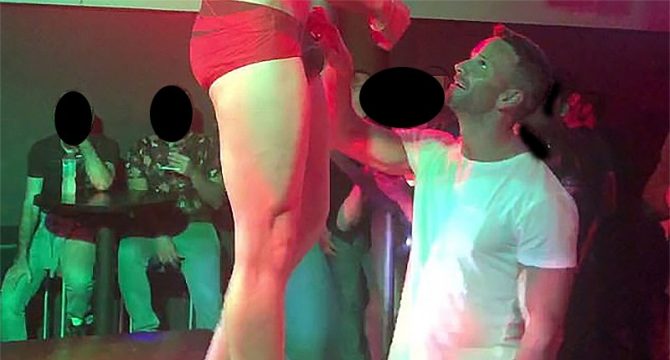 Related: WATCH: Video emerges of Aaron Schock hooking up with a guy at Coachella

While serving in as a U.S. Representative for Illinois’ 18th congressional district, Schock voted against the repeal of Don’t Ask, Don’t Tell and for the Defense of Marriage Act, which defined marriage as between a man and a woman. He also voted against adding sexual orientation, gender identity, gender, and disability to the federal hate crime protection groups.

“The last person I would expect to see in Boy Bar is a former Republican congressman,” the person who filmed Schock graciously handing out the bills last weekend told The Daily Mail. “I was taking a video of the go-go dancer on stage and all of a sudden I saw him. He looked like he was enjoying himself.”

Naturally, Twitter has had quite a bit to say about it…

“Hey Cutie, I’m Aaron Schock. As a congressman I voted against marriage equality, the repeal of ‘Don’t Ask, Don’t Tell’ and Equal Protections for LGBT folk. Now hold still while I shove this dollar down your shorts.” pic.twitter.com/YLGDXrW9Ei

Can’t we just skip ahead to the bit where Aaron Schock launches his OnlyFans account? Thanks in advance! https://t.co/yq5jzSrWFV

Aaron Schock: “I don’t mind male strippers being gay, I just don’t know why they have to shove it down my throat all the time.” https://t.co/fpoi2I7Msh

does aaron schock posting thirst traps from his vacation in mexico constitute an emergency?

I thought Aaron Schock was the stripper’s name….

@aaronschock what’s up with this? Anti-gay? More like into gays. pic.twitter.com/vqyXy84jTH

Only good thing Aaron Schock ever did for the LGBTQ community was tip the go-go boy tbh ?

“There’s no wrong way to be queer!”

There’s no shame in tipping male dancers. Lord knows I’ve done it a time or two. Then again, I’ve been out since I was 18, and have never been an anti-gay Republican congressman like @aaronschock. https://t.co/nQP5ZMBjHP