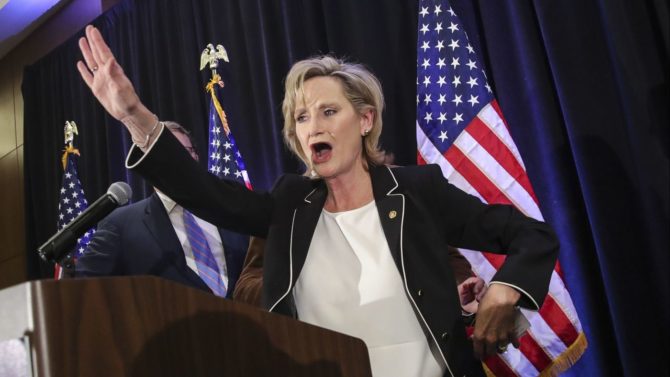 In the least shocking news of the week, Sen. Cindy Hyde-Smith, the racist, antigay Republican from Mississippi, won last night’s special runoff election, narrowly defeating the Democrat Mike Espy, who came just eight points away from becoming the state’s first black senator since Reconstruction, and thus bringing the 2018 midterm elections to a close.

Just a little recap: Earlier this month, Hyde-Smith, who was appointed to her senate seat in April following the retirement of Thad Cochran, came under fire when video of her joking about sitting in the “front row” of a “public hanging” surfaced online.

Days later, another video of her joking about voter suppression hit the internet.

Then photos of her wearing a Confederate soldier’s hat and holding a rifle while touting “Mississippi history at its finest!” were uncovered on Facebook.

Then it was revealed that she had attended a segregation academy in high school.

Then it was reported she sent her daughter to a segregation academy for high school, too.

Then it was exposed she accepted campaign donations from a former member of the KKK.

Honestly, though, is anyone really surprised voters in Mississippi picked her of all people to represent them in the United States Senate?

In the latest demonstration of their love affair with white supremacy, the majority of white women in Mississippi voted to send bigot @cindyhydesmith to the United States Senate.

Gov. Phil Bryant said the media turned out Republican voters “like never before” with our reporting on Cindy Hyde-Smith. She won by the slimmest margin of any Republican running for this Senate seat in 40 years. #MSSen

Good morning to everyone except Mississippi, who elected a blatant white supremacist who sent her children to a segregated school.

The state has so much suffering, but most is self-inflicted. Indulging your darkest nature is increasingly indefensible. https://t.co/4ja0tsEJpy

Seeing people I know, my friends, who voted for Cindy Hyde Smith with no other explanation than “She’s Republican” is honestly so hurtful. I have no problem listening to people’s beliefs and doing my best to understand but that is not a reason to vote someone like her into office

If you voted for this racist piece of shit I don't want to be your only "Black friend."

You are who you voted for!

Everyone in Mississippi who voted for the racist @cindyhydesmith, is a racist too! #FuckRacism