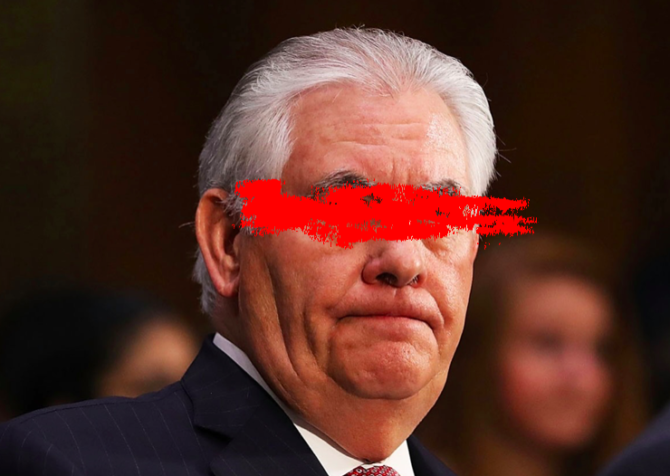 We always sensed something was a little off with Secretary of State Rex Tillerson. Now, we know what it is.

The Washington Post reports that Mr. Tillerson has serious issues when it comes to making eye contact with people. He also doesn’t like being spoken to directly. Evidently, it makes him nervous.

According to sources, America’s top diplomat has yet to meet many of the other career diplomats who work within the State Department. Those who have met him were purportedly told not to speak to him directly. And absolutely do not make direct eye contact under any circumstances! Lest they turn to stone. Or something.

After the story broke late yesterday, #RexTillerson started trending on Twitter, garnering more than 20,000 tweets weighing in on the Secretary’s bizarre social phobia.

Let’s take a look at what people are saying…

Every time you look at Rex Tillerson in the eyes, a baby seal dies.#Trumprussia #RexTillerson

Do not look Rex Tillerson in the eyes! #RexTillerson pic.twitter.com/BqZ157UQTC

If you look Tillerson in the eye you turn into crude oil.

If I'm ever standing in front of Rex Tillerson, I'm going to poke him in both eyes!!!! #rextillerson #dumptrump #theresistance

Every time someone makes eye contact with Rex Tillerson while Mike Pence eats with a woman, an angel gets their wings.