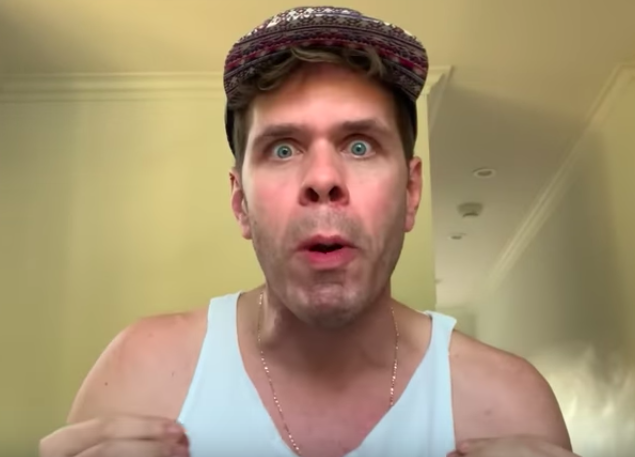 There’s been a lot of chatter about birthright citizenship this week after Donald Trump suggested he would end the 150-year-old policy by signing an executive order.

The policy is part of the Citizenship Clause of the Fourteenth Amendment to the United States Constitution, written in 1868, that states:

“It was always told to me that you needed a constitutional amendment. Guess what? You don’t,” Trump said. “I can do it just with an executive order.”

(For the record: This isn’t true. The president cannot alter, rewrite, or amend any part of the United States Constitution with the stroke of a pen.)

Related: Shep Smith takes another swipe at Trump on live TV and Fox News viewers are freaking the F out

Yesterday, Perez Hilton decided to weigh in on the debate. Because if there’s one thing the world needs, it’s the political pontifications of an internet bully.

I don’t agree with Donald Trump on many things, but I DO think that if a child is born in America to parents who are here illegally that they should not be granted automatic citizenship. And I say this as a liberal and Latina! https://t.co/AcLNjB9C37

Needless to say, the tweet didn’t go over so well:

How is it that Perez Hilton sees any difference in the way that he and I were born US citizens to Cuban parents and any other child born to immigrants? That he wants to deny future generations the rights he’s so enjoyed because of an arbitrary cut-off date? Shameful

I didn’t know we were still checking for Perez Hilton. I thought he faded away with the hype of ARTPOP.

Personally, I’d been waiting to decide how I felt about the issue until Perez Hilton weighed in. I kept asking myself, but what does Perez Hilton think about all this?

perez hilton is the fuckin textbook definition of a white gay pic.twitter.com/jHg8cueZap

You know what? I say this with a clear conscience: I hope Perez Hilton burns in hell. I hope he has the most brutal year imaginable. A white Latino man tweeting that shit about our suffering hermanxs? Fuck you and your privilege. You are condemning these people to so much pain.

Perez Hilton tried to be a Latinx liberal while flexing his white privilege at the same damn time. Whew Chile. Y’all be really into these weirdos. pic.twitter.com/bhhWRK0ufj

And Perez Hilton goes from being someone to ignore, to someone dangerous with a substantial following who becomes a part of the disinformation mechanism.

This has to be our favorite one…

After receiving nothing but backlash, Hilton released a seven-and-a-half minute video, further defending his position.

“I am not of the school of thought that I have to disagree with everything that Donald Trump says,” he said.

Blogger Yara Simón over at REMEZCLA explains why Hilton’s stance is so problematic:

While Hilton–aka Mario Lavandeiro–is the son of immigrants, his family doesn’t have the typical immigrant experience. Because they came from Cuba, the US government put his family on the path of citizenship through the now terminated wet-foot, dry-foot policy that allowed those from the Caribbean island to pursue residency a year after their arrival.

Even as immigration laws tightened, the government granted Cubans (who made the very dangerous journey by sea) this protection, which helped them start their lives in a new country without fear of deportation. However, for many other immigrants also fleeing poverty, violence, and oppression, they make the also treacherous journey to the US, and they often have no way to adjust their status.

Hilton, who was born in Miami, speaks from a position of privilege. If birthright citizenship had not existed at the time of his birth, he likely would have been OK, but it’s because his family had a protection that many others didn’t.