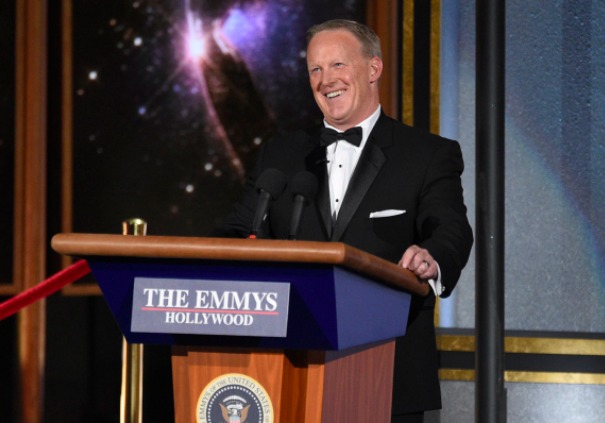 So in case you missed it, former White House press secretary Sean Spicer joked about lying to the American people in a surprise cameo appearance at last night’s 69th annual Emmy Awards.

Related: Hilarious memes of Sean Spicer hiding in the bushes will have you ROTFLOLing

Spicer made his way onto the Emmy Awards stage by rolling out the podium used to mock him on “Saturday Night Live.” He proceeded to poke fun at himself and all those times he lied from the White House press room.

While he may have gotten laughs from the audience, viewers at home didn’t quite see the humor in the Emmy’s trying to normalize an official who repeatedly misled the American public on behalf of a racist president, called concentration camps “Holocaust centers,” and was a general disgrace to America.

Scroll down for some of the responses…

Steve Bannon got a 60 Minutes feature & Sean Spicer got an #Emmys cameo, but Hillary Clinton needs to "shut up & go away"? Mmkay.

Wish I was at the Emmys so I could have jerked off @seanspicer too!

I've reported in 5 conflict zones, wrote a book and still have trouble getting men to take me seriously but Sean Spicer works at Harvard now

Pretty sure everyone at the Emmys should have been giving Sean Spicer the Tommy Lee Jones treatment. pic.twitter.com/IjbyuhDZKg

There wasn't anything funny about Sean Spicer repeatedly lying, sowing confusion and fear during a frightening time, like the travel ban.

If you're a white man in this country, your reputation can quickly recover after anything. Anything. ANY-FUCKING-THING.#SeanSpicer

I'm not ready to laugh "with" Sean Spicer. I think he is an evil, opportunistic liar that hurt our country.