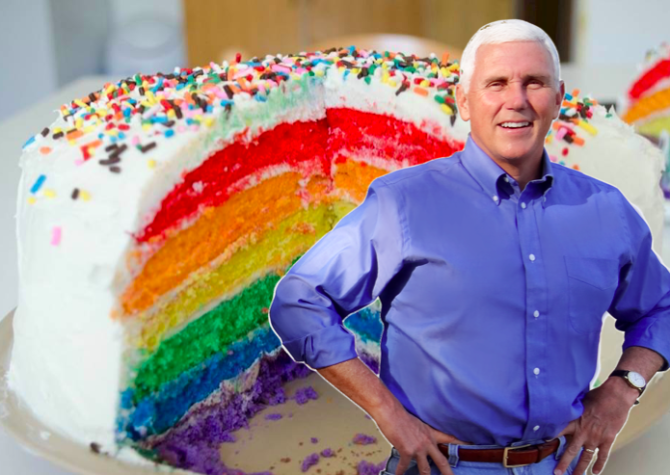 To celebrate the occasion, his staff decorated Air Force 2 with tacky balloons and streamers and threw him a “flying birthday party” as he jetted down to Houston to give a speech at NASA. Texas Sen. Ted Cruz along with Reps. Brian Babin and Lamar Smith joined him on the flight.

Meanwhile, folks on Twitter have been busy throwing serious birthday shade at the 48th Vice President of the United States of America.

Read some of their birthday “wishes”…

For Mike Pence's birthday, he's allowed to look at a woman who isn't his wife for 1/24th of a second.

Swore I'd never do this, but just once. Retweet to wish known homophobe and christian zealot @VP Mike Pence a happy birthday and a gay day! pic.twitter.com/VAwoyIXZPZ

wtf mike pence and my mom have the same birthday, god damnit

I imagine Mike Pence celebrates his birthday by drinking a glass of milk at 4pm while lighting a Redbook on fire.

Pence is a hologram. Holograms don't have birthdays. #MikePence

Happy Birthday, @mike_pence ????! Text 41444; keyword 58pence to donate to Planned Parenthood in his name to show him we're thinking of him!

Oh my god. Is today mike pence's birthday too?

Comey might've given Mike Pence his best birthday ever

Happy Birthday @VP Mike Pence! I made a donation to Planned Parenthood in your name for the occasion. #PP

I see its your birthday, Me Vice President @mike_pence… I hope you have an awful day & that you get a bad case of the two-bob-bits…

Bad enough to know that Mike Pence and I are from the same place, let alone that we apparently have the same b-day. pic.twitter.com/t7StBDZacW

Related: Mike Pence tweets that he wants a horse “inside” him and all of Twitter freaks out