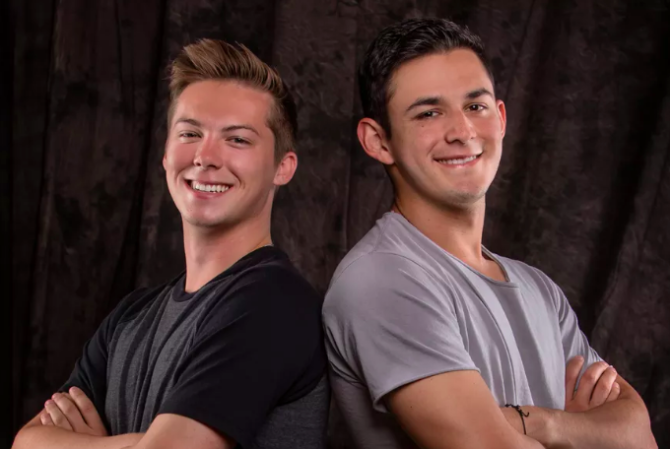 Axel Reed and Josh Velasquez have a lot in common. They’re both 21. They both grew up in conservative households in Southern California. They both swim on their college swim teams. Oh, and they’re both gay.

They recently shared their inspiring story with OutSports.

Reed grew up in Trabuco Canyon, California, where he attended a private, Catholic high school.

“I always knew there was something different about me from my friends,” he says. “I was always good at hiding my emotions and pushing my feelings deep inside, so I had no problem hiding that I was gay until high school.”

He used his sport as a distraction.

“Swimming was my outlet, my distraction and my excuse,” he recalls. “I dated a few girls, but never anything too serious. I would consistently use training as an excuse to not date.”

Velasquez has a similar story. He grew up in Corona, California, in a Christian household where he was being gay was a sin.

“I knew I was attracted to men at a young age but I fought those emotions and pushed them far down,” he says. “I’ve had such hard time coming to terms with my sexuality because I was scared that my family would hate me because homosexuality is a sin.”

And, like Reed, he, too, was a member of his high school’s swim team and dated girls as a way of masking his sexual orientation.

“I swam club and varsity my entire high school career,” he says. “I wanted to fit in with my friends. Luckily, I was able to play a good cover. … I would date girls so no one could see that I was hiding my true feelings.”

Even though the guys lived in different cities and attended different schools, they would run into each other at swim meets from time to time. In 2014, they connected on Instagram and became fast friends.

We would chat all the time and the summer before we both left for college we became extremely close. It was really hard to say goodbye to each other after becoming so close. Swimmers have a special connection, and that was the reason we clicked. There was something else though, another reason why our friendship was different.

That fall, Reed started classes at Villanova University. Meanwhile, Velasquez attended University of Arizona. But they kept in touch on social media.

While in college, both young men struggled with keeping their sexual orientations a secret. Reed recalls:

I was faced with a lot of stress and anxiety that first year of college and found myself often driving aimlessly through Pennsylvania or sneaking into the pool area to sit in the bleachers and just think. I struggled a lot with the thought of people knowing and having the confidence to walk around campus and the pool deck having people know the real me.

One night, he got a text out of the blue from Velasquez. It read: “I’m gay, Josh. Are you?” Reed waited a few minutes before replying, “Yeah, I am, Axel.”

After that, the guys say they became each other’s rocks.

They were able to confide in one another in a way they couldn’t with other friends. Though they attended different schools in different states, they were always just a phone call away from one another. When Velasquez fell into a depression his sophomore year of college, Reed was there to give emotional support. When Reed was attacked by another classmate, Velasquez offered his advice on how to navigate the situation.

Then there was the coming out experience. Both guys were there for each other when they finally decided to come out to their friends, families, and teammates. Since Reed had come out a year before Velasquez, he was able to coach him through the process, and check in on him from time to time.

Velasquez says if it weren’t for his friend, he might still be in the closet today.

“We wanted to share our story jointly so that other swimmers or people struggling to come out don’t feel alone,” Reed, who will graduate early with a degree in business admin, says. “Realize that others are experiencing the same thing as you and they made it through it.”

Velasquez, who is majoring in neuroscience and cognitive behavior, adds: “Love yourself and don’t push away the people close to you because this is the time you want them as close as possible.”