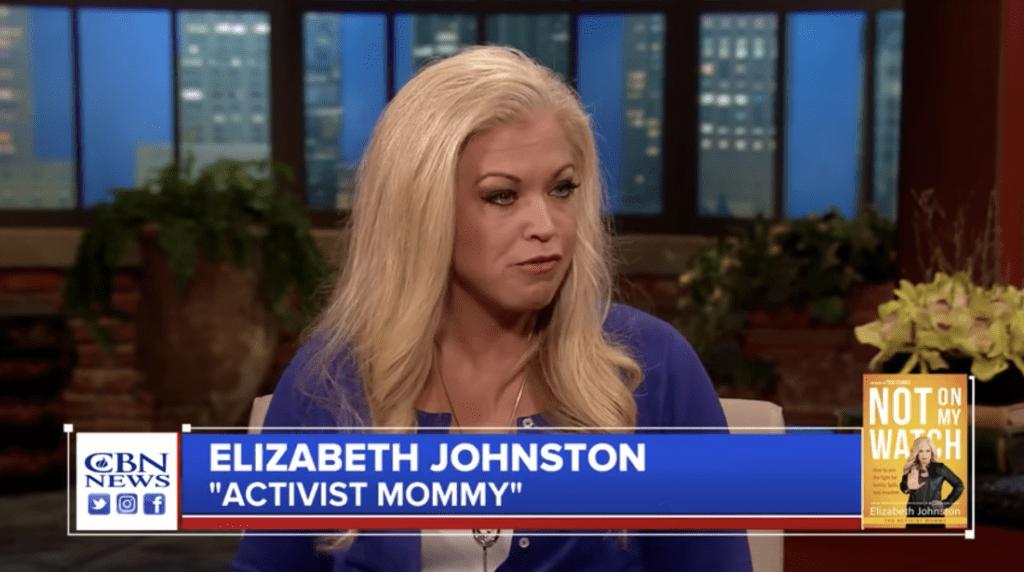 Elizabeth Johnston, a.k.a. “Activist Mommy”, the god-fearing, homeschooling mother of 10 who doesn’t believe in same-sex marriage or LGBTQ rights, recently announced she’s getting divorced and she needs all the prayers she can get.

In a Facebook post shared Friday, Johnston revealed that her porn-addicted husband has been “repeatedly unfaithful” and “psychologically and emotionally abusive” towards her for over 15 years.

“After repeatedly taking him back, covering for him, preserving his reputation, and forgiving him of adultery, pornography and sexual immorality, which began 16 years ago, I have been forced to come to the harsh realization that I’ve done all I can and am entrusting Him to my Savior!” Johnston wrote.

Then on Sunday, Johnston, who believes Jesus will save us from the coronavirus, took to Instagram to say she’s been feeling depressed since announcing the end of her marriage. So she did what any soon-to-be-single-mother-of-10 in her situation would do… She hopped into their minivan and drove down to her local abortion clinic…

To pray, of course!

“Feeling pretty broken today,” Johnston wrote, “so we went and prayed at the most broken place in the city! The abortion clinic.”

“In my grief, I could barely pull myself out of bed this morning, but I’m so glad I did. When you are walking through tragedy, sometimes the best ministry to your soul is to minister to others.”

Feeling pretty broken today…so we went and prayed at the most broken place in the city! The abortion clinic. ??? We celebrated 5,000 babies saved with the wonderful ministry @cities4life_charlotte! In my grief, I could barely pull myself out of bed this morning, but I’m so glad I did. When you are walking through tragedy, sometimes the best ministry to your soul is to minister to others. ?

Johnston first rose to online prominence during the debate over marriage equality in 2015 and has since built her social media platform on spewing Christian hate against LGBTQ people.

In the past, she’s said she doesn’t consider same-sex marriages “real” and refuses to write the words “gay” and “marriage” without using condescending quotation marks.

She’s also warned marriage equality would lead to pedophilia and was a vocal supporter of Kim Davis, the county clerk (currently on her fourth marriage) who refused to sign marriage licenses for same-sex couples after the Supreme Court’s 2015 ruling.

Naturally, Twitter has had a lot to say about the news of Johnston’s failed marriage…

Elizabeth Johnston – Activist Mommy
Is getting a divorce. How sinful 😂 #lgbtq

In all fairness based on her writings a single mother should not have custody of children.
Unfit based on the broken home.#activistmommy #divorce

Maybe she should have been more of an activist in her own home instead of going around scolding all of us. pic.twitter.com/Nt448UNk9g

Activist Mommy is getting a divorce. We call that KARMA

Sorry. I couldn’t resist logging-on to Twitter to comment on this little nugget: One of our heterosexual, Christian stewards of marriage’s sanctity, Elizabeth Johnston, has decided to ‘weaken’ it.

See you again in April.https://t.co/0euopnIZum

Me seeing that the Activist Mommy’s marriage fell apart pic.twitter.com/IjRetPI3TQ

So the Activist Mommy is getting a divorce.

It’s difficult for me to feel sympathy here given her long history of abhorrent behaviour towards people like me. Thing is though? That’s what makes us different. I can forgive and feel sympathy BECAUSE I take my faith seriously.