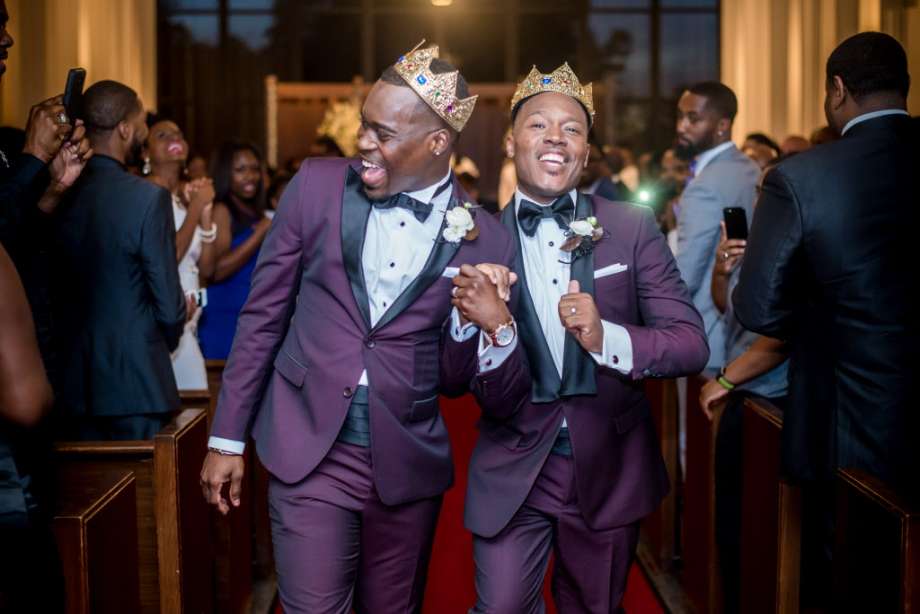 Harrison was assigned to be Adrian’s mentor during the pledging process. Adrian was 22 and Harrison was 29.

Related: What It’s Like To Be A Gay, Insultingly Handsome Fraternity Brother

“Organizations like Delta Phi Upsilon allow black gay men a space where we can explore empowerment, which I think is really important,” Harrison says. “I think your self-confidence leads you to the trajectory of your life. The more organizations you can get in where they’re going to empower, I think it puts you on a trajectory that’s closest to your best self.”

Neither of the guys expected that their fraternity bond would lead to marriage, let alone a romantic partnership.

What started as some flirty text messaging quickly turned into something more. Adrian admits that there are some members of their fraternity who feel that, even though it’s a gay frat, brothers should not be romantically involved.

“I don’t share that idea,” he says. “I’m on the other end of the spectrum, where I believe if this is a cohort of the best men? available, then why not?”

Related: After being outed by a classmate, college football star found acceptance in a frat

Earlier this year, after ten years together, Adrian and Harrison finally exchanged vows before 275 friends and family members, including several of their Delta Phi Upsilon bothers.

The wedding included a total of 19 groomsmen and groomsmaids and an extravagant “coronation of love” that involved each of the grooms crowning the other.

They also held a tribute to their friend Chyna Gibson, a trans woman who was killed in New Orleans earlier this year.

“She was so excited about being in the wedding, so we had to incorporate her into the ceremony,” Harrison says. “We opened it up with the officiant ?doing a tribute to her and laying a rose at the altar.”