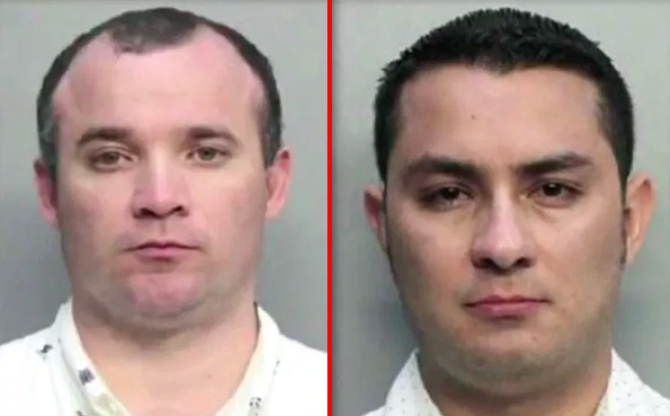 Two Catholic priests were busted in Miami Beach after bystanders spotted them giving each other blowies in their in broad daylight and called 911.

39-year-old Diego Berrio and 30-year-old Edwin GiraldoCortez were visiting Miami from Chicago, where they both work at Mission San Juan Diego Parish in Arlington Heights.

Police got a 911 call about a lewd and lascivious incident taking place in the 1300 block of Ocean Drive.

When officers arrived, the police report states, the two were performing sex acts on each other “in full view of the public passing by on Ocean Drive and the sidewalk.”

The priests were so into what they were doing that they didn’t even notice police standing outside the vehicle, which was parked across the street from a busy playground, until an officer tapped on the window to get their attention.

“There’s a time and a place for everything,” Miami Beach Police spokesman Ernesto Rodriguez says, “and this certainly was not the time and place.”

Both priests were arrested and charged with Lewd and Lascivious Behavior. GiraldoCortez was also charged with Indecent Exposure.

After the story broke, the Archdiocese of Chicago’s office released a statement saying it was taking the matter “very seriously”.

“It is our responsibility to ensure those who serve our people are fit for ministry,” the statement read.

It went on to say:

Cardinal Blase J. Cupich, archbishop of Chicago, has removed Fr. Berrio from ministry and withdrawn his faculties to minister in the Archdiocese of Chicago, effective immediately. The archdiocese will appoint an administrator for the Misión San Juan Diego as soon as possible.

“Archdiocese representatives have been in contact with Fr. Cortes’ home diocese of Soacha, Colombia and informed them that Fr. Cortes will not be granted additional faculties to minister in the Archdiocese of Chicago.

Both priests have since bonded out of jail. Neither has issued any comment.