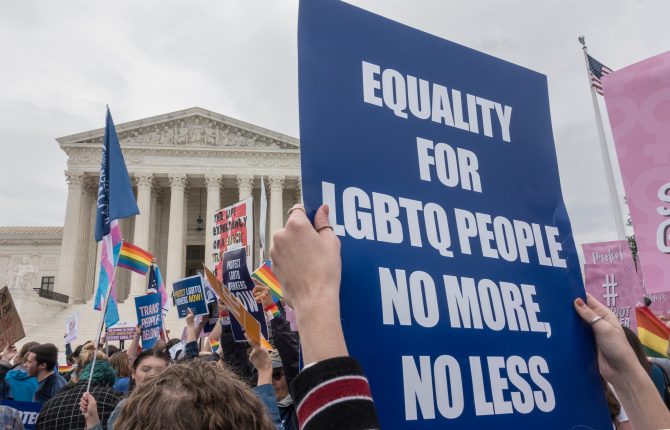 The Supreme Court decided on Monday morning not to take up a case involving former Rowan County Clerk and forever fashion icon Kim Davis, the Christian woman who took the law into her own hands when she decided not to issue marriage licenses to same-sex couples on the grounds that her religious beliefs were being violated. But the bigger story is that two Justices — conservatives Clarence Thomas and Samuel Alito — issued a statement in which they harshly criticized the historic Obergefell v. Hodges case from 2015 that legalized same-sex marriage nationwide.

To back up a bit, two same-sex couples whose marriage license requests were denied by Davis were given the go-ahead in lower courts to seek damages from her. Davis’ lawyers wanted the Supreme Court to reverse the ruling, arguing she had “qualified immunity” to exert her Christian beliefs in her government role.

The Supreme Court will not take up the case, and the earlier ruling that the couples may file lawsuits against Davis stands. We expect we still haven’t heard the name Kim Davis for the last time.

While Thomas and Alito did say that they agreed the case should not be taken up by the Supreme Court, they also squeezed in — on page 55 — that same-sex marriage is a big problem that the Court needs to deal with.

Here’s how it reads:

In Obergefell v. Hodges…, the Court read a right to same-sex marriage into the Fourteenth Amendment, even though that right is found nowhere in the text.

Davis may have been one of the first victims of this Court’s cavalier treatment of religion in its Obergefell decision, but she will not be the last. Due to Obergefell, those with sincerely held religious beliefs concerning marriage will find it increasingly difficult to participate in society without running afoul of Obergefell and its effect on other antidiscrimination laws.

By choosing to privilege a novel constitutional right over the religious liberty interests explicitly protected in the First Amendment, and by doing so undemocratically, the Court has created a problem that only it can fix. Until then, Obergefell will continue to have “ruinous consequences for religious liberty.”

Did you catch that last part about how same-sex marriage is a problem that only the Supreme Court can fix?

While only two Justices signed their names to the statement, it’s a troubling development given the fact that conservative Catholic Amy Coney Barrett stands poised to join the Court and give it an overwhelmingly right-leaning slant.