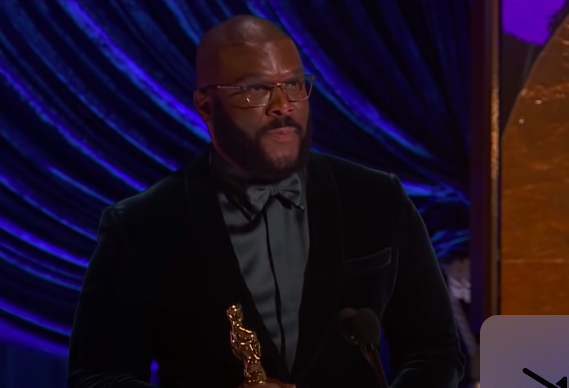 Tyler Perry was awarded the Jean Hersholt Humanitarian Award at the 93rd Oscars last night for his for his work helping people during the pandemic. In his speech, Perry called for people to “refuse to hate.”

Related: Glenn Close’s “Da Butt” dance was the highlight of the Oscars. Was it all staged?

Yes, folx. You read/heard that correctly, Tyler Perry mixed up the letters in LGBTQ. People in the room didn’t seem to notice (probably because they were all half asleep), but those on Twitter certainly did, and they had a lot to say about it.

They also had a lot to say about Perry denouncing hate when so many of his films, plays, and TV shows contain homophobic stereotypes and gay jokes, dabble in transphobia, slut shame women, vilify bisexual men, and stigmatize AIDS.

Oh, and they had a lot to say about Perry comparing being LGBTQ to being a cop.

can we talk about how lowkey homophobic Tyler Perry’s writing be? like I’m not saying he himself is homophobic clearly but at the same time if the shoe fits… https://t.co/wxGLgAdthc

did Tyler Perry just compare receiving racist and homophobic hate to the experience of being a police officer?

I have no doubt that Tyler Perry is a great person. But that does not make his homophobic, misogynistic, offensively conservative "films" any less atrocious.? #Oscars #Oscars2021 #Oscar2021 #Oscar #TylerPerry

All I'm gonna say is that Tyler Perry makes a lot of hateful statements about women and gay people in his work. #Oscars

And hating a police officer is not the same as being xenophobic and homophobic.

Too much money for him not to know the difference pic.twitter.com/Ro6n3DlTpu

So racist, homophobic, and xenophobic folks will denounce hatred because Tyler Perry said so?

is this a joke, w Tyler Perry getting a humanitarian award? gives his whole team vaccines, yeah great, so they can keep making the most homophobic and misogynistic movies in mainstream cinema, great, congratulations.

Hey Tyler Perry, thanks for talking about cops in the same sentence as gay and black people, but being a cop is a choice, and very single other thing you mentioned is not.