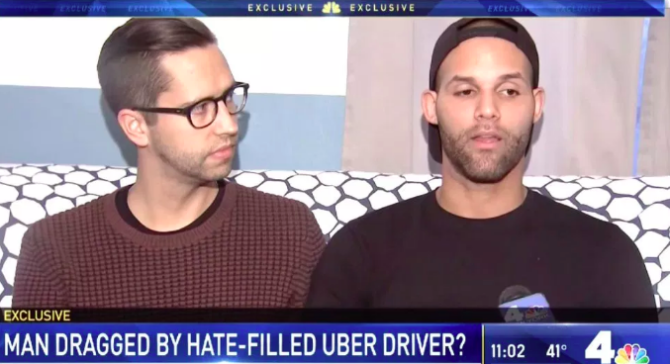 It all started with a kiss.

Taray Carey and his husband Alex Majkowski were riding in an Uber from the East Village when they shared a brief kiss in the backseat, prompting the driver to fly into a fit of rage.

Eventually, the driver, identified on the app as “Denis”, pulled over. But as Carey was trying to exit the vehicle, Denis allegedly gunned the engine, dragging Carey along the ground down the street while Majkowski watched helplessly from the backseat.

Carey was dragged along the road for a quarter of a block, leaving him with bloody scrapes on his hand, knee, and hip and a large welt on the back of his head.

***PLEASE SHARE***Tonight I was thrown out of an #uber by a homophobe. I tried to step out, and he gunned it while my…

Majkowski was eventually able to escape the vehicle when the driver pulled up to a red light a short while later. As he sped away, the couple called police.

Carey says the first NYPD cops to respond to the couple’s complaint didn’t take them seriously.

“The police laughed,” claims Carey. “[One officer] said, ‘You probably deserved it.’ It was insult to injury.”

But in a statement, NYPD says body camera footage contradicts Carey’s allegations against the officers:

After reviewing body camera video from the responding Police Officers, at no time did any of the officers mock the victim, tell him that he probably deserved it or laugh at him. A complaint report was filed for leaving the scene of an accident with injury and is being investigated by the 9th Precinct Detective Squad.

Meanwhile, Uber says it is looking into the incident. Carey was refunded for the ride and “Denis” has had his account suspended.

“What’s been reported is very concerning to us,” the company says. “Uber does not tolerate any form of discrimination. The driver’s access to the app has been removed as we continue to investigate.”