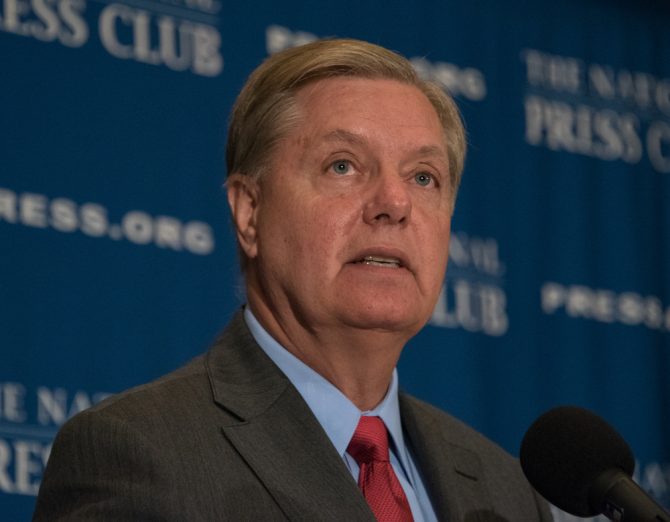 Presidential lapdog Sen. Lindsey Graham is facing calls to resign after being accused of trying to pressure election officials from his own party into throwing out legally cast ballots for Joe Biden.

The Washington Post reports that Georgia’s secretary of state Brad Raffensperger, a Republican, was totally shocked when the antigay senator from South Carolina personally called him to inquire about signature matching, which he interpreted as a not-so-subtle ploy to get legally cast mail-in ballots thrown out in certain (read: Democratic-leaning) counties.

“During our discussion, he asked if … the absentee ballots could be matched back to the envelope,” Raffensperger told CBS This Morning. “I explained our process, after it went through two sets of signature match, at that point they were separated.”

“But then Senator Graham implied for us to audit the envelopes and then throw out the ballots for counties who have the highest frequency error of signatures. I tried to help explain that because we did signature match, you couldn’t tie the signatures back anymore to those ballots.”

But it’s not just in Georgia where Graham has purportedly taken a sudden interest in mail-in ballots. The New York Times reports that he also hassled election officials in Nevada and Arizona, two other key states that tipped the election to Joe Biden.

To be very, very, clear, the chair of the Senate Judiciary Committee is being accused of using his position to bully state officials into undermining democracy and throwing out legally cast ballots.

House Judiciary Committee member Rep. Hakeem Jeffries says Graham “may have crossed the line into illegality.” And Rep. Pramila Jayapal has gone to so far as to say he needs to resign.

“It has now been corroborated that he urged the Secretary of State in Georgia to find a way to throw out legally cast ballots,” she tweeted. “There must be accountability and justice for this dangerous attack on our democracy.”

It has now been corroborated that he urged the Secretary of State in Georgia to find a way to throw out legally cast ballots. There must be accountability and justice for this dangerous attack on our democracy.

For his part, Graham has called the allegations “ridiculous” and insists he was merely trying to “protect the integrity of mail-in voting.”

It’s still unlikely that any of these efforts will change the results of the presidential race, let alone allow Trump to serve a second term. But the Republican Party is now going beyond the scope of soothing the president’s psychic wounds and towards seeking mass disenfranchisement on a scale unseen in American elections since the end of Jim Crow. Those who supported this effort or merely stood by while it happened should never be forgiven for their role in it. Of them, Lindsey Graham is uniquely beyond absolution.

Related: Lindsey Graham goes on TV to whine about how everybody “hates my guts”