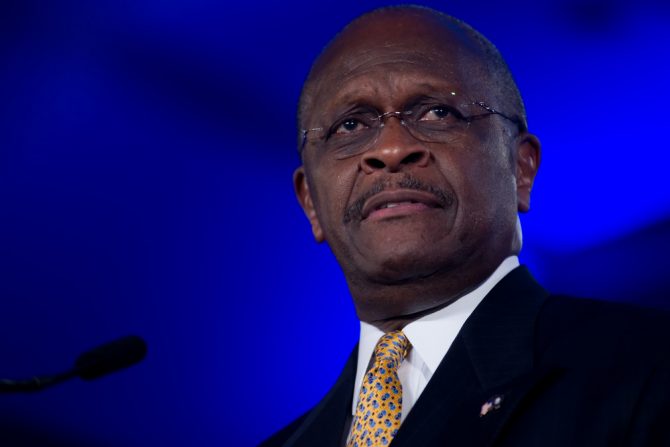 Herman Cain, the 2012 Republican presidential candidate who died of COVID-19 after attending Trump’s MAGA rally in Tulsa, has been super busy bashing Kamala Harris on social media two weeks after being laid to rest.

“How well prepared is Kamala Harris for the presidency?” Cain, or someone pretending to be him, posted on Facebook yesterday. “We take a look. We’re not impressed and you won’t be either.”

How well prepared is Kamala Harris for the presidency? We take a look. We're not impressed and you won't be either.

Then this morning, Cain’s Twitter page posted another attack on Harris, calling her “awful.”

“Harris has a ton of baggage and a political glass jaw,” the tweet read. “She’s awful. Tulsi has already demolished her once. Should she get the chance to do it again?”

Harris has a ton of baggage and a political glass jaw. She's awful. Tulsi has already demolished her once. Should she get the chance to do it again? #2020election #KamalaHarris #TulsiGabbard https://t.co/blaGlCVyMr

Naturally, people have had a lot to say about Cain tweeting from the grave…

Isn’t Herman Cain dead? Is he tweeting from the grave in support of the man who is, in some sense, responsible for his death?

I’m sorry for your loss. Herman Cain died because he didn’t listen to science.

What’s worse is that his example is also the reason more people will die than necessary.

Use your voice for good if you insist on tweeting from his account.

Herman Cain died from COVID-19 two weeks ago. Why is he still tweeting? pic.twitter.com/12C41Ztw2i

With the election coming soon, we really can’t overlook that Trump wants to get rid of the #USPS but ALSO that Herman Cain is launching Zombie Twitter

Great way to honor a person who died, because of neglect from the federal government. The alleged leader who encouraged him to engage in unsafe behavior, where he ultimately got the #TrumpVirus. This is shameful.

When Herman Cain passed, some people were like “Don’t speak ill of the dead.”

Well, the dead’s family has decided the best way to honor him is to keep shitposting from his account. https://t.co/l0j5ZqVZma

USA Today reports that the person responsible for trashing Harris on Cain’s behalf is his daughter, Dr. Melanie Cain Gallo, who explained on her dad’s website that “he wouldn’t have wanted that work to stop with his passing,” and adding that his voice is “needed now more than ever.”

Except that it’s not his voice.