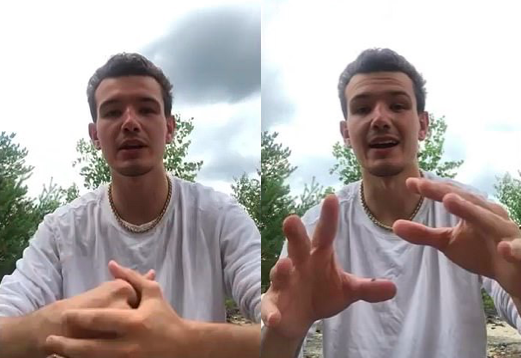 Despite being in the middle of a worsening pandemic that has, so far, killed 135,000 Americans and counting, thousands of revelers flocked to Fire Island last weekend to party for the 4th of July.

Giancarlo Albanese drew criticism when shared photo from a Fire Island event, along with the caption: “F*ck Your mask. F*ck your social distancing. F*ck your vaccine. F*ck your eugenics. Kiss my a**hole if you think I’m an a**.”

Later, it was reported that Giancarlo’s mother is immunocompromised and currently going through chemotherapy, and his father is still recovering from open-heart surgery, putting both of them at high risk for severe illness and possibly death should they contract COVID-19. Not only that, but Giancarlo lives with them.

At least, he did until someone alleging to be his brother claimed on social media that he had been kicked out of the house for his reckless behavior.

Queerty reached out to Giancarlo for comment earlier this week, but we never heard back from him. Then yesterday, he posted a rambling 13-minute video blasting his critics, who he calls “tattletales,” and spewing conspiracy theories about how coronavirus was “lab-made” to cause “mass hysteria.”

“Paranoia, hysteria and fear that has crippled the world,” he wrote in the caption. “During these times, let us not hate or fear our friends families and neighbors for a Lab Made virus! Say NO to the agenda, Predictive Programming and Fear Mongering!”

In the video, Giancarlo doesn’t mention anything about being evicted from his parents’ house, but he does say he has “nothing to be sorry for” before launching into a truly bizarre rant about how the coronavirus pandemic is just a bunch of “bullsh*t.”

“The world has been consumed by mass hysteria and paranoia on an unprecedented scale right now,” he says, adding that he refuses to fall for any of it.

Then he accuses the people who doxed him of being “tattletales.”

Related: Fire Island partier who said “f*ck your mask!” gets kicked out of his parents’ house