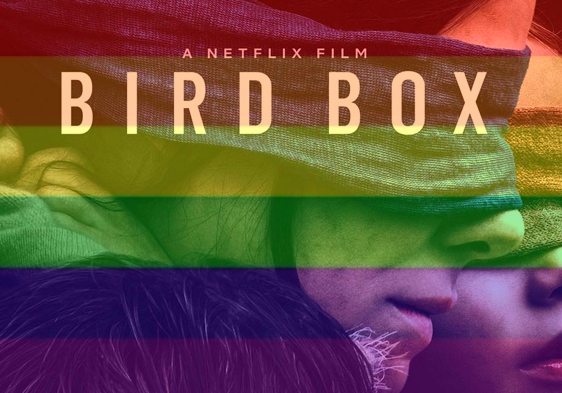 This just in: The gays own Bird Box. Just like Halloween and Britney Spears, Bird Box is official gay property. Sorry, hets. It’s ours.

Not only does the Netflix blockbuster give off serious queer vibes (some have gone so far as to declare the entity in the film an official gay icon), but it has inspired an endless supply of super gay memes.

So, yeah. Bird Box belongs to the gays. But don’t just take our word for it. Folks on Twitter agree.

I need to see Birdbox. Or my gay license will be revoked #Birdbox

had a birdbox inspired dream but all we had to do to be safe was get under a blanket by a certain time, but all my friends kept dying anyway because they are gay and therefore late constantly

I’m 5 mins into bird box and sir they are no sisters, that’s some big gay energy how does anyone think that’s how sisters are!!?!? I refuse to believe this is not lesbian

Every gay this morn: What are these Bird Box memes?
An hour ago: *watches on Netflix App*
Tomorrow: *Makes Bird Box meme*

Can we make the entity from Birdbox a Gay Icon pls

So in Bird Box if you were already depressed and/or blind would you just be perfectly fine? Because if so I think my roomies and I would all live and so would many of our gay friends. Gay paradise y'all

How many gays do you wanna bet are going to go shirtless with speedos to the bars on Halloween with blindfolds on saying they’re “Bird Box”???

birdbox is now a gays only event

Related: More super gay ‘Bird Box’ memes to help get you through the week