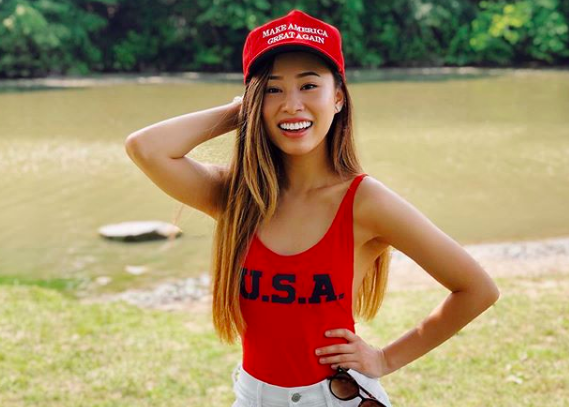 First, a little backstory: In July 2019, after it was learned the 20-year-old reigning Miss Michigan had posted racist and homophobic musings on her social media accounts in 2017 and 2018, officials from Miss World America decided she was simply too bigoted for their organization. The tweets included praising Hitler, mocking queer people, attacking women who wear hijabs, and saying Black people have lower IQs than people of other races.

In response, Zhu, a heterosexual, put out a statement saying she stood by her tweets then claimed “coming out as a conservative is way harder than coming out as gay in today’s society.” Not that she has any idea what it’s like to come out as gay.

Then she hit the media circuit, appearing everywhere from Fox News to CNN to Dr. Phil, where she boasted her support for Donald Trump and insisted her racism was just a “difference of opinions.” Then, borrowing a page from the president’s playbook, she tried flipping the script by saying people who called her racist were the real racists.

“The left has a hard time understanding that minorities can be conservatives, too. And I feel like that was a big trigger for them,” Zhu told Fox News, adding that many liberals “have used racial slurs against me.” (She failed, however, to offer an examples of these alleged verbal assaults.)

Towards the end of the interview, Zhu seemed to be angling for a spot at the network, saying, “I’ve always wanted to be a full-time political commentator or a news host, so this really brought conservative voices and attention to what I believe in.”

Not soon after that Fox News appearance, Zhu was praised by Donald Trump on Twitter and scooped up by his reelection team, invited to join the Women for Trump Coalition Advisory Board, alongside homophobic husband beater Stacey Dash, fired Fox News commentators Diamond and Silk, and former Arizona governor/birther Jan Brewer.

Welcome Kathy Zhu to the Official #WomenforTrump Coalition Advisory Board! She is a patriot who has continued to stand…

“I am so excited to be able to join Women for Trump,” Zhu said in a statement. “This is an organization that truly empowers women’s voices and lets us be heard. This is such a once in a lifetime opportunity and I couldn’t be more blessed. I can’t wait to help our president get elected a 2nd term!”

Well, Zhu’s time on the board ended up lasting approximately one week and included only one speaking engagement at a random luncheon in Bloomfield Hills, Michigan before she threw in the towel.

“I’ve been doing a lot of thinking & I’ve personally decided going fwd to not be part of the Trump women’s coalition,” she tweeted on July 30, adding that she was about to start her final year at the University of Michigan again and her top priorities were “1) Education 2) Graduate 3) Secure the bag.”

The images showed Fairbanks strapped to a chair with a gag in her mouth and her breasts exposed. Fairbanks claimed the photos were taken years earlier, when she was only 17, by an abusive ex-boyfriend.

Even after learning the pictures were taken when Fairbanks was underage, Zhu said she didn’t regret sharing them.

“I sleep really well at night knowing I did absolutely nothing wrong,” she tweeted, adding that she planned to file a lawsuit against anyone who attempted “slander” her.

Big thanks to the policy communications team at Twitter for taking it seriously when I reached out. I shouldn’t have had to escalate this to contacts at the platform though. The report option for this type of harassment should be taken more seriously. pic.twitter.com/mWz3mEYA9I

Yes, you read that correctly, folks.

In late February, she traded in her red MAGA hat and hate slogans for a pastel pink sweatshirt and blonde dye job with the launch of Kappa Zeta, which bills itself as the world’s “first-ever, online-based sorority.”

The organization’s goal is to “foster genuine friendships from all over the country.”

“Our core values are to empower others, demonstrate strength, and show kindness,” its About Page reads.

In addition to empowering other women, Zhu also appears to be trying her hand a music career, posting videos of herself to YouTube singing pop songs in her bedroom.

As Kathy wraps up her time at the University of Michigan, finishing a degree in political science, more than 36 million Americans and counting have filed for unemployment, the highest number in recorded history.

The young woman who spent all of last summer praising Donald Trump and crowing about making America great again is about the enter the worst workforce the country has seen in decades, overseen by the very man for whom she fell on the sword, and got absolutely nothing in return.

the passion of ellen
9