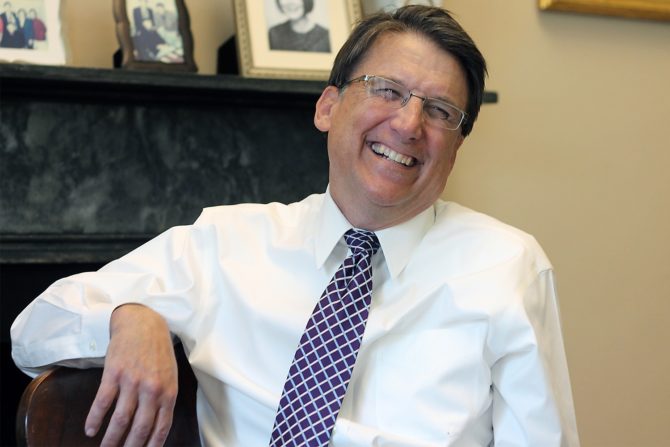 Like a festering case of herpes, ex-governor Pat McCrory refuses to go away. This time he’s thumbing his nose at LGBTQ people whom he says “lost” their battle for equal rights in North Carolina.

Just to recap: McCrory signed HB2 (a.k.a. the bathroom bill) into law last year. The discriminatory bill cost the state of North Carolina not only its reputation, but an estimated $3.76 billion. It also cost McCrory the election. He was ousted from the governorship after just one term and replaced with Democrat Roy Cooper.

Last week, Cooper signed House Bill 142, which repealed HB2. Sort of. HB142 still allows parts of HB2 to stay in effect until 2020. Mainly, the part that forbids local municipalities from passing their own non-discrimination ordinances. Understandably, people aren’t thrilled about that. Also, many LGBTQ groups are unhappy because they say the new law doesn’t ensure trans citizens access to public bathrooms that match their gender identity.

Cooper acknowledged that the compromise was “not a perfect deal or my preferred solution,” but that it was “the best deal we could get.”

“I believe with all my heart that this is the right thing to do,” he said shortly after signing the bill. “It’s not a perfect deal, but it repeals House Bill 2 and begins to repair our reputation.”

“The good news is this: the HRC lost the battle,” McCrory gloated in an interview with Tony Perkins of the Family Research Council. “With their resources and power and money, and their trying to get some other corporations to help support them in the battle…[The] fact of the matter is, they did not get a full repeal of HB2.”

He continued, “Hopefully, we’ll get back to the priorities…we need to be working on: Safety of citizens, good roads, good education.”

Last month, McCrory told The News & Observer he was having a very difficult time finding employment since everyone thinks he’s a bigot, which, he insisted, “is the last thing I am!”

Pat McCrory doesn’t have any credibility on the issue as the person who signed the law that got North Carolina into this mess. Governor Cooper signed the new law that repealed HB2, saying it is a step forward but not the only step. He supports statewide protections for LGBT North Carolinians and will keep working for them.