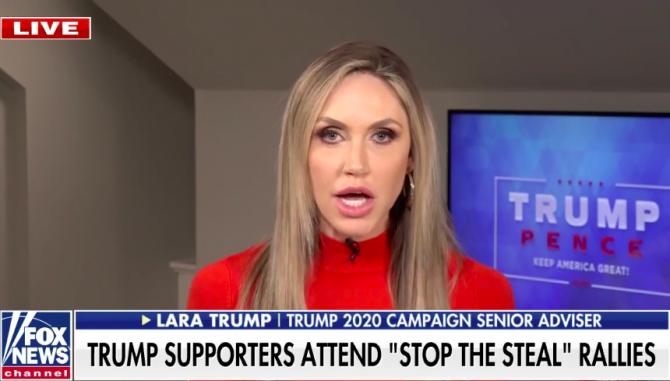 In a last ditch effort to somehow find a way to swing the election to Donald Trump, Eric Trump‘s wife, Lara, went on Fox News the other day to say that a lot of people “do not feel” Joe Biden won the election, sooooo he shouldn’t be president, right? Right?!

“Last time I checked the people were still in charge of the United States of America,” Trump said, “and there are about 74 million people out there who do not feel like the result of this election that’s been presented is accurate.”

Unfortunately for Trump, there are about 80 million people out there who do feel the result of this election is accurate.

Related: Eric Trump urges Minnesotans to get out and vote for his dad… one week after the polls closed

She continued by saying it’s “very hard for people to rationalize” how someone like Joe Biden, who could “barely scrape together 12 people to go to a campaign event,” somehow managed get the most votes of any presidential candidate in American history. Like, seriously, what’s that even about?

“Donald Trump gained 10 million votes from 2016,” Trump, who is rumored to be considering a 2022 run for Senate in North Carolina, blabbed. “We all were out working across the country hard. You saw that tens of thousands of people would come to Trump events and then, like, 12 to 20 people showing up to a Joe Biden event.”

Related: Eric Trump is absolutely losing it on Twitter, urges people to call a fake number to report fraud

She then went on to make false claims about “dead people voting” before mentioning something about $12 Gucci wallets and adding that “something is wrong.”

“We have been trying to get to the bottom of it from the Trump campaign,” she continued, “and we just want the right thing to happen, all the legitimate votes to be counted.”

57 days until the inauguration, folx!

"We just want the right thing to happen, all the legitimate votes to be counted," says @LaraLeaTrump pic.twitter.com/Lrkb5zo2LN

Related: Laura Ingraham ripped to shreds for telling her viewers Joe Biden will be the next president