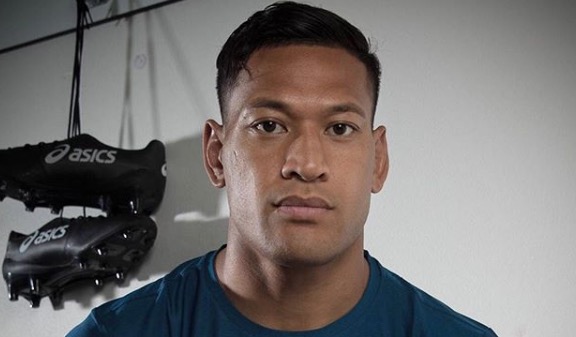 Israel “Izzy” Folau is a professional rugby player from Australia. He’s also a raging homophobe with a history of being rewarded for his bad behavior.

This week, the 30-year-old New South Wales Waratahs player took to Instagram to once again lecture his 330K+ followers about the evils of homosexuality, warning them that “hell awaits … homosexuals,” and urging gay people to “repent” as “only Jesus saves lives.”

“Those that are living in sin will end up in Hell unless you repent,” he spouted. “Jesus Christ loves you and is giving you time to turn away from your sin and come to him.”

Those that are living in Sin will end up in Hell unless you repent. Jesus Christ loves you and is giving you time to turn away from your sin and come to him. _______________ Now the works of the flesh are manifest, which are these , adultery, fornication, uncleanness, lasciviousness, idolatry, witchcraft, hatred, variance, emulations, wrath, strife, seditions, heresies, envyings, murders, drunkenness, revelings, and such like: of the which I tell you before, as I have also told you in time past, that they which do such things shall not inherit the kingdom of God.
Galatians 5:19?-?21 KJV _______________ Then Peter said unto them, Repent, and be baptized every one of you in the name of Jesus Christ for the remission of sins, and ye shall receive the gift of the Holy Ghost.
Acts 2:38 KJV _______________ And the times of this ignorance God winked at; but now commandeth all men every where to repent:
Acts 17:30 KJV _______________

“You are an absolute flop,” one person wrote, adding the he is a “disgrace to the green and gold jersey.”

“Hell awaits those with tattoos as well mate, as the bible also forbids those,” another person said. “But I guess you ignore that part.”

“You truly are an idiot,” a third person commented.

But this is hardly the first time Folau, who is an active member of the antigay Assemblies of God fellowship, has come under fire for his homophobia.

Last year, he refused to apologize after saying “gays go to hell,” declaring he’d rather walk away from rugby than say he was sorry. He also slammed marriage equality and published a lengthy op-ed about his extremist beliefs.

Despite a huge public outcry and threats from sponsors, no disciplinary action was taken against Folau. In fact, a few months after the controversy, he was offered a long-term extension on his contract running through the end of the 2022 season.

This week, Rugby Australia issued yet another statement condemning Folau’s latest tirade and saying it is “investigating” the matter.

“The content within the post is unacceptable,” the statement read. “It does not represent the values of the sport and is disrespectful to members of the rugby community.”

But it remains to be seen what, if anything, will happen to Folau who, just last weekend, broke the all-time record for tries scored in Super Rugby with his 60th try in six years.

If history is any indication, he will likely get another slap on the wrist. Or maybe even a pay increase.

Related: A royal family member has had ENOUGH of this rugby star’s relentless homophobia