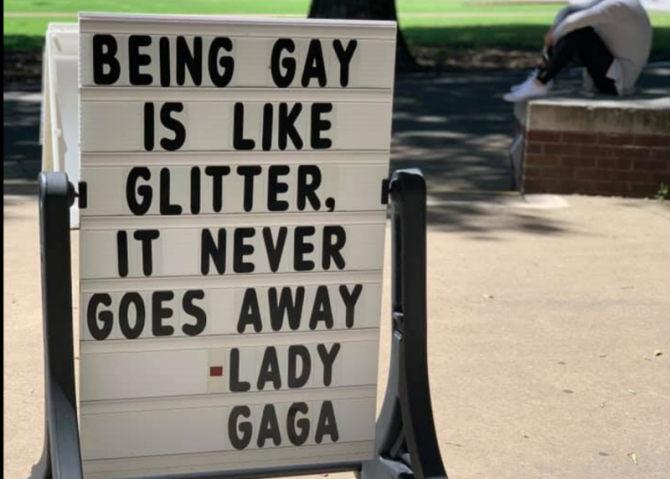 After ordering a Pride month sign be taken down from outside the university library, the president of the University of Central Arkansas is pushing back against accusations of homophobia.

Last week, University President Houston Davis ordered a sign quoting Lady Gaga be removed from the school’s library, claiming it advocated “a personal viewpoint” that could potentially corrupt the minds of young children.

The sign was posted by staff members of the university’s Torreyson Library and read: “Being gay is like glitter. It never goes away. — Lady Gaga.”

When Davis got wind of it, he demanded the sign be removed.

In an email to faculty, staff, and students sent earlier this week, Davis explained that the sign was “not okay” because it was being used to “advocate for a personal viewpoint” that he believed crossed a line.

If that wasn’t bad enough, he brought up a summer band camp currently happening on campus which is attended by impressionable secondary school students from the area.

“We have to be very mindful of the hundreds of minors that are on campus during the summer,” he wrote, adding that the university needed to be mindful about “how to present or represent issues when minors are on the campus.”

Because, evidently, being gay is an “issue,” and God forbid children learn gay people exist in the world!

He begins by saying he was “very sorry” for how his initial email came across, then states that the university is “absolutely committed to supporting our LGBTQ students and our entire campus community.”

“Nothing about the communication yesterday was meant to imply that minors should not be exposed to the LGBTQ community,” Davis adds. “This is absolutely not how that was intended, but a great deal of feedback has made it clear that some interpretations led to that conclusion.”

(Um, when you say things like “We have to be mindful of the hundreds of minors that are on campus” while talking about censoring a sign about LGBTQ equality, how else is that supposed to be interpreted?)

Davis continues: “I also want to address the conclusion that some have come to that, because of this event, UCA does not value, support, and protect our LGBTQ community. That is simply not true.”

He then offers a list of the LGBTQ events and offerings at the university, of which there are many, adding that “You will find me at many of these events, supporting our students and their programs.”

Davis concludes by saying he doesn’t feel the accusations being made against him are fair.

“While I know not to take the criticism personally,” Davis writes, “my professional record and the record of my leadership team does not merit some of the names that are being hurled nor the label of anti-LGBTQ.”

OK, OK. We’re willing to give Davis the benefit of the doubt here. This is likely a case of another straight, white dude in a position of power who was blinded by his own privilege, not by homophobia.

But hopefully this experience has helped to enlighten him on how his words and actions may be interpreted by other non-straight, non-white people who exist in the same world as him. Because Lady Gaga’s right. Being gay is like glitter. It never goes away.

No word yet on whether the Pride sign will be allowed to go back up.