Peaceful protesters getting tear-gassed but I’m so glad Ivanka didn’t forget her purse!

What on earth is she carrying in there? Her pride? Her soul? S’mores? pic.twitter.com/sbzHxo4SzY

Hey, remember when Ivanka Trump brought a $1,500 handbag to a civilian tear gassing in June 2020? Well, Donald Trump‘s former Chief of Staff Mark Meadows has some things to say about that…

In case you need a refresher, Ivanka carried the $1,540 Max Mara handbag from the White House to St. John’s Episcopal Church on June 1, 2020, during the height of the protests sparked by the murder of George Floyd. Inside the bag was a Bible, which she handed to her father to hold for a photo opp. 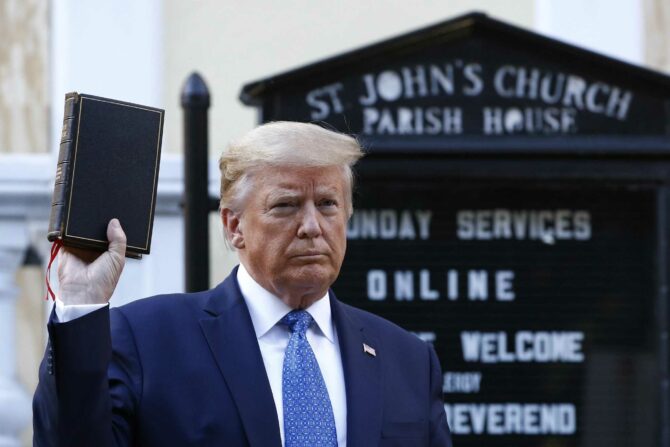 In his new book, The Chief’s Chief, Meadows confirms that, as reported by the New York Times last year, the whole stunt was Ivanka’s idea from the get-go and that she wanted to “send a message to people of faith.”

Meadows writes that he felt uneasy watching the group of protestors gather outside the White House, saying he “noticed that the crowds were getting a little too close to [St. John’s Church] for my liking.”

“I knew that these protesters had done massive amounts of damage to buildings over the past few nights, and I shuddered at the thought of the same thing happening to a sacred place like St. John’s,” he writes. “In the Oval Office, President Trump expressed similar concerns.”

Related: Nobody showed up to Donald Trump and Bill O’Reilly’s “History Tour” and the photos are so, so sad

“It didn’t surprise me that of all the historic buildings standing around Lafayette Square, these rioters would go after a sacred house of worship. It all seemed terribly on brand for them.”

That’s when Ivanka hatched up a plan.

Why not just tear gas the people gathered outside the church and then have her dad walk over and say a prayer or give an impromptu speech or something? It would send a message that “law and order would prevail” and give hope to “people of faith.”

“As I watched President Trump listening to his daughter, I could tell he loved the idea,” Meadows writes.

We all know what happened next.

Meadows confirms that Ivanka carried the Bible in her designer handbag as the group marched over to the church.

“I was never prouder to be serving under President Trump than I was walking with him across Pennsylvania Avenue to declare once and for all that in the United States of America, we would not stand for the degradation of our heritage or the burning of churches,” he writes.

Initially, they wanted to enter the building, inspect the damage, and say a prayer, but they had to settle for a quick outside photo shoot at the last minute after seeing the sanctuary was boarded up.

“I found it disturbing that of all the things that could have been attacked, these rioters chose a house of worship,” he adds. “I prayed, once again, that we would finally see an end to the violence and chaos.”

After the tear-gassing, Rev. Mariann Budde, bishop of the Episcopal Diocese of Washington that oversees the church, said she was absolutely “horrified” by what happened at the steps of the church.

“The symbolism of [Trump] holding a Bible … as a prop and standing in front of our church as a backdrop when everything that he has said is antithetical to the teachings of our traditions and what we stand for as a church,” she told The Washington Post at the time.

And Rt. Rev. Michael Curry, presiding bishop of the Episcopal Church, accused him of using “a church building and the Holy Bible for partisan political purposes.”