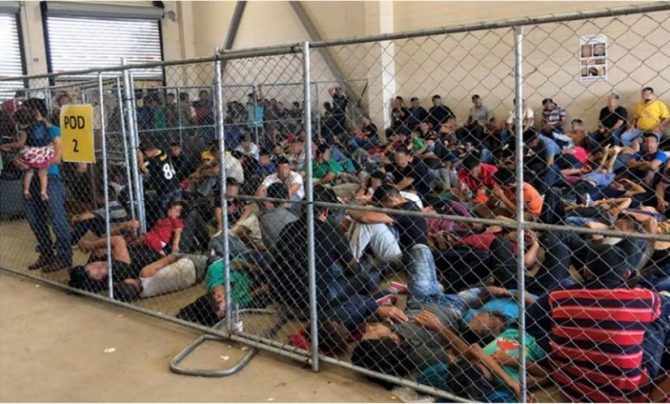 U.S. Customs and Border Protection agents at the El Paso Processing Center, a facility operated by ICE, allegedly forced a Honduran migrant to walk around carrying a handwritten sign reading “I like men” in Spanish. According to CNN, the alleged act was meant to humiliate the man, and a CBP agent reported the March 5 incident to his supervisor via email.

“This report has been made and is currently under investigation,” an El Paso CBP spokesman said in an email, per the El Paso Times. “CBP takes allegations of mistreatment of individuals in our facilities seriously, and all allegations are reported to both the DHS (Department of Homeland Security) Office of the Inspector General and the CBP Office of Professional Responsibility. Any employee found to have violated our standards of conduct will be held accountable.”

As the Times points out, many Central American immigrants are LGBTQ individuals trying to escape transphobic and homophobic oppression and violence at home.

Related: This stunning photo series documents LGBTQ refugees on the Migrant Caravan as they wait for asylum

A CBP agent previously told CNN that a supervisor in El Paso joked about running over migrants with a car, with that source adding that being derogatory is part of border patrol culture.

Representative Joe Kennedy III recently toured the El Paso and Clint detention facilities and gave the following appraisal of the conditions there:

Spent the morning in TX at Clint and El Paso detention facilities. Big takeaways — 1) @CBP was very resistant to Congressional oversight. They tried to restrict what we saw, take our phones, block photos and video. Atmosphere was contentious and uncooperative.

2) Facilities are wholly inadequate. Cells maxed to capacity, concrete floors…It felt jail-like. No way to keep a child or innocent human being. Group of 13 women from Cuba were in tears when we spoke with them.

3) The entire system is broken, rotten and rife with abuse. And Trump doubles down on it despite the growing horror — child detention, metering, Remain in Mexico, threatened ICE raids. Every action he takes exacerbates and entrenches the humanitarian crisis at our nation’s feet.

Our oversight is not deterred. Congress won’t let up.