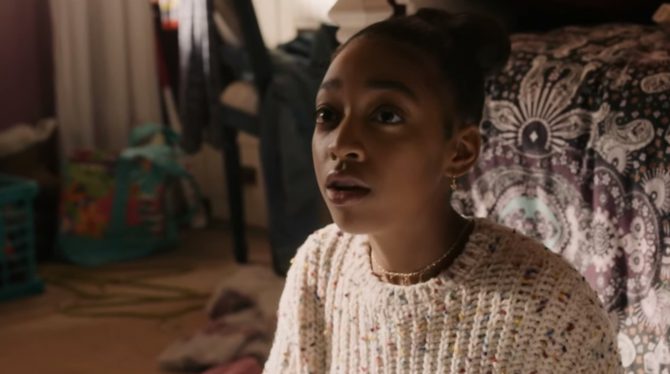 In a delightful sign that progress marches on, the acclaimed NBC drama This is Us just had a character come out…a teen character.

In this week’s episode, Tess (played by Eris Baker), speaks to her uncle Kevin (played by Justin Hartley) about the inner struggle of coming out as gay. She came out to her parents (Sterling K. Brown and Susan Kelechi Watson) earlier in the season in a delicate, sensitive scene.

Tess’ coming out to her uncle followed that same trend. Waxing philosophical, she discussed the predicament of coming out, and how even after doing so, she still didn’t feel like she knew her entire self. “I thought coming out to you guys would be the hardest part,” she says. “But instead, I just have a million more questions about myself. Like what clothes make me feel like the ‘real’ me? What books should I be reading? What movies should I see? When should I tell my friends?”

Kevin comforts her by pointing out that everyone–queer or otherwise–takes a lifetime to get to know themselves, and that connecting with people we love often helps us find buried pieces of ourselves. The scene reflects a thoughtful sensitivity rarely seen in coming out scenes, and a better understanding of the insecurities queer people face beyond just coming out.

Now in its third season, This is Us has earned wide acclaim for its featuring a diverse cast of characters, and for addressing a wide spectrum of issues. The show also features diversity behind the camera, with a number of African-American writers on staff, and for granting work to African-American directors, including recent Oscar winner Regina King.

This is Us airs on NBC on Tuesday nights, and streams on NBC.com