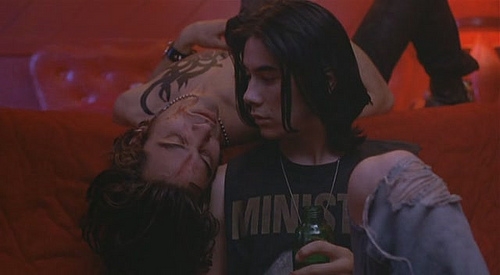 Times change. Few communities know that as well as we do, having seen their rights and acceptance evolve radically in a few short years–and begin to erode under He We Need Not Name. For proof, look no further than the annals of queer cinema, which has mostly kept up with the times. Queer characters and stories have grown rich and diverse, depicting people from all walks of life, and with all kinds of different experiences.

Of course, it wasn’t always so. Which brings us to these films. Once upon a time, they purported to spotlight the community with sharp accuracy–and in some cases, they actually did. Today, however, they feel dated and in some cases, downright infuriating.

Have a look, and consider yourself warned.

Some of us of a certain age can recall a certain time not long ago when it seemed like every movie about a gay man had to be about coming out and having a tragic love affair. Edge of Seventeen exemplifies that trend, and in a post Love, Simon/Moonlight world plays cliché and dull. Worse, the gay relationship at the center of the story feels more rapey than romantic, as one half of the couple cruelly deflowers the other and purposely breaks his heart. Then, as now, gay men deserved better.

The Boys in the Band

Mart Cowley’s 1968 landmark play became a film in 1970, courtesy of Oscar-winner William Friedkin’s (The Exorcist, The French Connection) direction. By the time it hit movie screens, however, critics and audiences alike already decried the material as dated. Chock full of self-loathing, pathetic characters, negative stereotypes and a lot of homophobia, the idea that the film would ever be considered a watershed for its positive portrayal of gay men nauseates us. The 2018 Broadway revival of the play overcame this issue by purposely making the characters seem antiquated and dated. Too bad the film version doesn’t have the same luxury.

Midnight in the Garden of Good and Evil

The public raised a collective eyebrow when Oscar-winner Clint Eastwood announced he would direct this film version of the celebrated John Berendt novel. To this day, the novel about the underground queer culture of 80s Savannah remains the longest-standing bestseller in the history of The New York Times. The problem with the film: Eastwood forgot to add the gayness. Though the Lady Chablis—the noted transgender cabaret performer—plays herself (which we love), the male lead (played by John Cusack) suddenly becomes straight. For that matter, in a cosmic twist destined to elicit laughs, Kevin Spacey plays a closeted predator of young men…though the film seems a bit wishy-washy on if his character is actually gay. Given that Spacey’s character allegedly kills his boyfriend, that makes this movie adaptation both nonsensical and straight-washed to the point of stupidity.

Cat on a Hot Tin Roof

Have two stars ever looked so beautiful as Elizabeth Taylor and Paul Newman in Cat on a Hot Tin Roof? We’re not sure that’s even possible, which makes the epic failure of this screen adaptation of the Tennessee Williams play all the more tragic. Williams loved Cat as his own favorite of all his plays, and despised this bowdlerized film version which eliminates all the references to homosexuality that should drive the plot. In the play, Newman’s character, Brick, had a romantic attraction to his best friend Skipper, who commits suicide just before the play begins. The movie drops this crucial point, muddling Brick’s character and the rest of the story along with him. Someday, Cat on a Hot Tin Roof could make for an incredible film if the screenplay retained Williams’ original script. Dear Hollywood, somebody please get on that…

Related: Guess which superstar just offered to replace Kim Cattrall in Sex and the City 3?

Will Smith made his first foray into drama in this adaptation of the popular play about a scheming gay hooker. That’s also the problem: Smith (reportedly on the advice of Denzel Washington…jerk) refused to have any scenes that would involve him kissing or otherwise showing affection to another male. That hinders the overall impact of the piece, not to mention Smith’s credibility in the part. Thank goodness then for Stockard Channing who recreates her stage performance, and who provides an even enough keel to keep the film engaging. To his credit, Smith eventually regretted and apologized for his decision, which almost makes his performance here tolerable. Almost.

Whether or not Basic Instinct should even be lumped in with other queer movies remains a heated debate. What is certain is that the film—one of the biggest hits of 1992—does not do justice to its LGBTQ characters. Sharon Stone commands the screen as a bisexual, sex-crazed author who also might just be a killer, but the movie handles her sexuality, as well as that of several other bi and gay characters, more as a plot device aimed at titillating the straight men in the audience rather than a believable portrayal. Moreover, it plays into the longstanding cinema trope of queers as cold-blooded murderers. The community deserves better, but then, so does the general moviegoing public.

Wait a tic, you say? Fried Green Tomatoes is a gay movie? Well, it’s supposed to be…not that the film wants you to know. What served as the center point of the novel—a lesbian relationship—gets watered down to the point that nobody even realized the film’s leads, played by Mary Stuart Masterson and Mary-Louise Parker—were actually supposed to be a couple. In a telling move, both Parker and Masterson, as well as author/screenwriter Fannie Flagg, have all criticized the movie since its release for deleting the lesbian romance in favor of a “just friends” plot. All that said, Fried Green Tomatoes still has plenty of charm, so next time just watch it and imagine the lesbian sex is happening off-screen. For extra help, pour yourself a very large glass of wine.

Hollywood first attempted to take on transgender characters with this mostly-forgotten “comedy” based on gay writer Gore Vidal’s novel. Apart from the casting choices—two separate cisgender actors, Raquel Welch and Rex Reed, play the title role—which today seem insensitive, the movie fails as a comedy on an epic scale. Whereas Vidal’s novel focused on the emancipation of Myra by her gender transition and worked as a scathing satire of Hollywood in the 70s, the movie comes off cruel and ugly as exemplified by a rape scene played for laughs. How Welch, John Huston, Farrah Fawcett and—of all people—Mae West ended up in this cinematic excrement is beyond us.

Sex and the City 2

Is it just us, or did the once-relatable ladies of Sex and the City lose all their luster when they transferred to the big screen? Characters that once seemed real and fun now felt greedy and narcissistic. That goes for the series’ gay characters too, never more so than in the cringe-inducing wedding scene in the second film. Though we love Liza Minnelli in any capacity, having her show up to officiate a gay wedding ceremony and perform a Beyonce number feels dangerously close to an insult to the diva. Worse, the loveless marriage between Willie Garson’s Stanford, who just wants to have a wedding, and Mario Cantone’s Anthony, who’s more interested in hooking up with the Gay Men’s Chorus rather than his actual groom. In fairness, Sex and the City 2 has problems way beyond just its treatment of queer characters. Still, in a movie with myriad problems, it’s one foul we can’t overlook.