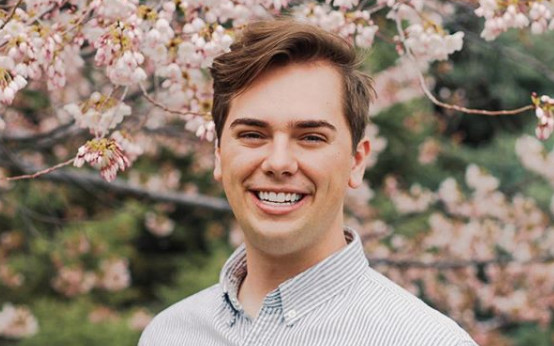 This profile is number three in Queerty’s Out For Good series, recognizing those who came out to make a difference this year. The series runs through National Coming Out Day October 11.

Bio: Matt grew up in Salt Lake City, and then attended Brigham Young University in Utah to study political science. Right away, he found the atmosphere at BYU oppressive; Easton realized that he’s gay, and the Mormon school has strict policies against “homosexual conduct,” whatever that is. Students or faculty can report a student for even the most casual affection between people of the same sex such as holding hands or hugging. Had Easton violated this school code, he would have faced expulsion. Despite living in fear of this discriminatory policy, Easton excelled academically, becoming class valedictorian. After graduating this year, he has worked for another gay prodigy in Mayor Pete Buttigieg‘s presidential campaign.

Coming Out: After both suffering and triumphing during four years on campus as he approached graduation, Easton knew he needed to come out in a public way to stand up to BYU’s damaging policy. He consulted with his parents, extended family, and friend before writing his valedictory speech. Standing before a huge, stunned audience, he proclaimed, “I stand before my family, friends and graduating class to say that I am proud to be a gay son of God. I am not broken. I am loved and important to the plan of our great creator. Each of us are.”

Making a Difference: Following his graduation, he was interviewed by Ellen. He revealed that another student had inspired him to come out: Harry Fisher. Fisher and Easton shared a class together during Easton’s second semester, and just ahead of Fisher’s graduation. The two developed a friendship. Then, just prior to his graduation, Fisher came out on Facebook. The public shaming and hateful response he received from friends and classmates sent him into a depressive spiral. Fisher committed suicide.

Related: Valedictorian gets a standing ovation after coming out as bisexual in a graduation speech

As he approached his own graduation, and as he grappled with his own feelings, Easton couldn’t help but think of his friend, wondering if his won future would mirror that of Fisher. He decided to come out during his speech to inspire other people–especially other young, questioning students–to do the same and to offer comfort and reassurance that they are loved and part of God’s plan.

Matt Easton’s Words of Wisdom, as told exclusively to Queerty:

For a long time, the only place I thought the world had to offer me was one in which I couldn’t be true to myself. Coming out was my defiance against this idea—it was a deliberate act to claim my space and show that I deserve to be a part of my community exactly as I am. I also chose to come out because there are still so many people who can’t. Coming out gives a voice to the voiceless and shows that there is a future for us. There is hope for us. There is life for us. Every person who comes out makes it easier for the next person to do the same and acts as a catalyst for change.