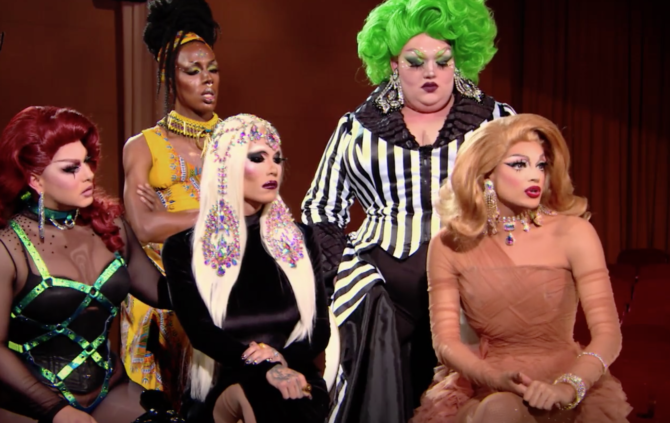 Valentina made a name for herself on season nine of RuPaul’s Drag Race with flawless looks, an upbeat attitude, and a refusal to get down in the trenches and start slinging dirt at her fellow competitors when tensions got high.

Which makes it all the more strange that many of her fans online have apparently harassed some of the other season nine queens.

In the below preview of the reunion episode airing June 16th (one week ahead of the June 23rd finale), RuPaul asks Valentina to speak about this contradiction.

“Why do you think your fans came for the girls so strongly?” Ru asks.

“My following is very underrepresented in the media. I represent something similar to what Selena represented in the ’90s… they’re overprotective of that,” Valentina replies. “I don’t agree with that kind of behavior because that’s not the kind of person that I am.”

“Why didn’t you say that on the media?” Peppermint reasonably asks.

“You never told them to stop,” Alexis Michelle chimes in. “I called you. I FaceTimed you in tears because of people telling me I should go kill myself because I’m so ugly and so fat, and I should have volunteered to eliminate myself over your elimination.”

“I’m really bad with social media,” Valentina says. “I kind of just love to live my everyday life. And I don’t really like to be involved with what people think or what people are saying.”

“Girl, you can say you’re not on social media, but when we were in Montreal, you were on that phone checking every like, every follow, every single thing. Whether you were reading the comments, verbatim, or not, you knew what was going on,” clocks Shea Couleé.

“Also, when we were shooting the promo for this show, you said to me, ‘Shea, I just want to say, if anyone comes for Nina, I told her that I will stand up for her. I will address my fans, and I will make it all right.’ I’m confused.”

“You don’t need to be confused, but you have lots of opinions about me tonight, Shea,” replies a shaken Valentina doing her best not to appear shaken.

Watch below (head here to view the clip if the video isn’t showing up):