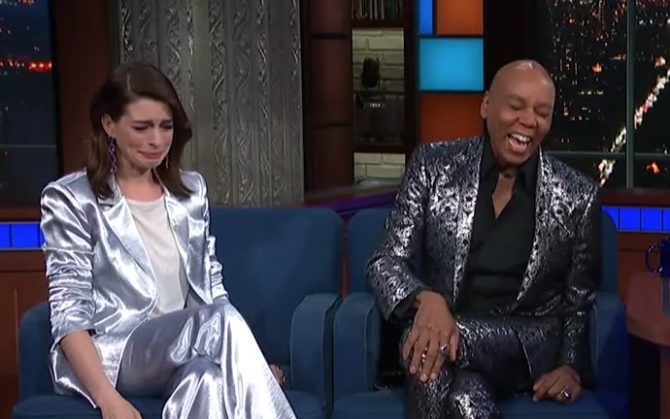 Anne Hathaway got more than she bargained for on Stephen Colbert’s couch this week.

The Academy Award-winning actress stopped by The Late Show Tuesday to promote her new film The Hustle, and at one point in the interview, revealed that her “comfort food on television” is RuPaul’s Drag Race.

We’d go more with a “Sunday night football” analogy but to each their own.

“Oh my god, I love that show so much,” she gushed.

Related: ‘RuPaul’s Drag Race’ season 11: Plastique Tiara on her journey from Vietnam to the House of Edwards

Colbert responded by telling her RuPaul would be his guest the following show and asked: “Would you like me to send a message to him? Is there anything you’d like to say to him?”

“Well, why don’t you say it to him right now,” Colbert said, and just like magic, RuPaul divined his way onto the set.

“Shante you stay,” said Ru, blessing Hathaway with the spirit of hip pads and contouring.

Hathaway then went into some specifics of why the show has resonated so much with her:

“Monet X Change’s entire journey. Just how amazing she was in season 10. I really take this very seriously.”

“And then the growth between season 10 and season 11,” she continued, “and the way she stepped her pu*sy up. I feel like since I started being an actress I’ve learned how to step my pu*sy up. And now I’m (bleeped) and I’m just so thrilled for her and me and you and you.”

The Hustle, which stars Hathaway and Rebel Wilson, is in theaters May 10.