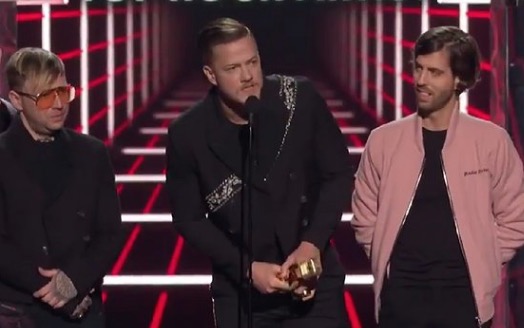 “I just want to take this moment,” began Dan Reynolds at the Billboard Music Awards, “to say there are still 34 states that have no laws banning conversion therapy.”

Reynolds was accepting the award on behalf of his band, Imagine Dragons, for ‘Top Rock Artist,’ but rather than thank his family, manager or Jesus (the holy trinity of award acceptance speeches), he used the entire time to talk about the harmful practice.

“On top of that,” he continued, “58% of our LGBTQ population live in those states. This can change, but it’s going to take all of us talking to our state legislation, pushing forward laws to protect our LGBTQ youth.”

For Reynolds, this wasn’t just a PR stunt to appear socially conscious. Having been raised in the Mormon Church, and witnessing its damaging homophobia firsthand, he’s used his fame as a catalyst to share his own evolution around LGBTQ issues.

A 2018 HBO documentary titled Believer follows Reynolds as he put together the first LoveLoud festival to fight antigay stigma in the Mormon community and beyond.

“I hope people understand the importance of fully accepting and loving our LGBTQ youth,” Reynolds told Queerty last June. “I hope people are able to watch [the documentary] and feel the harsh realities that our LGBTQ youth are facing in faith-based communities. I hope it perpetuates change.”

“It’s not working and it needs to change.”