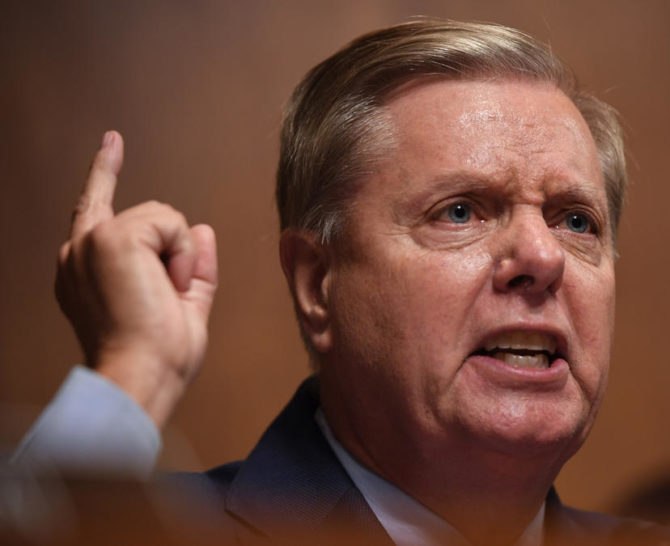 For some reason, the antigay senator from South Carolina cruised down to Arizona over the weekend to monitor construction of the wall and he was absolutely aghast at what he saw.

In a series of angry tweets, Graham criticized the Biden administration for stopping construction on the project. Then he shared several pics and videos of the gaping space and demanded it be taken care of immediately.

“Nothing around here makes any sense unless you plug this hole!” he declared.

The Biden Administration has apparently decided to stop construction and plugging this hole in the wall.

I'm going to make sure the Department of Homeland Security tells us why. pic.twitter.com/umNlhWuEjm

This is dumb, even by the standards of the federal government.

You won’t believe this…. pic.twitter.com/N7cr3WPdKr

“They’re having to use labor-intensive efforts of manpower,” Graham continued. “They’re having people watch and ATVs going up and down. If they would just build these two panels, they could take those resources and apply it somewhere else.”

“Whether you’re Republican, Democrat, vegetarian, libertarian–it makes no sense to build a wall with a hole in it!”

In case anyone missed it, the only reason the hole in the wall exists is the Biden Administration refuses to finish construction.

The panels are ready to be put up!

Under the Trump administration, the U.S. built new barriers along a 455-mile stretch of land along the Mexican border, 49 miles of which previously were without any barrier.

Biden paused construction of the wall on January 20, 2021.

You can see Ted Cruz’s vacation from there

Well, you’re the one who’s been promoting the construction for the last 4 years, so …..

What I can’t believe is my senator spending my tax dollars to travel to a state he doesn’t represent, only to gripe about policies he has no authority to change. Your job is to represent your constituents – not smear other politicians.

Will this wall keep @tedcruz @SenTedCruz from getting to Cancun pic.twitter.com/68HfFH9EyL

leave a hole, so you have something to politicize.. standard republicans. You don’t think these contractors had plenty of time to finish it.. why didn’t they prioritize it once the biden admin got in. Fake hole, Fake outrage, manufactured problem.

The entire wall is useless. Glad you finally get it

Trump said he already finished it so we’re all set

You have to admit they are not sending their finest from Mexico! pic.twitter.com/gkZ96oMIEy