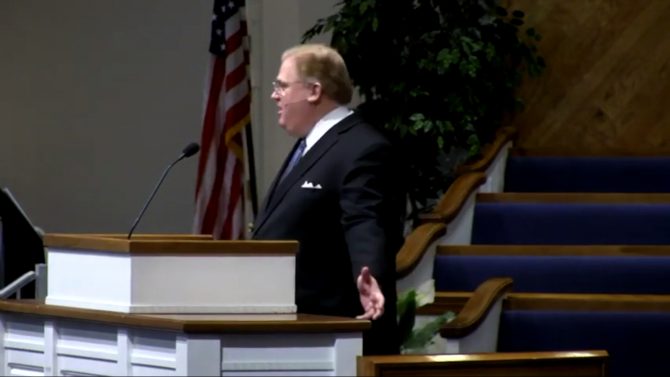 Leaving a vile aftertaste to his standing ovation at his son’s American Idol performance, video has surfaced of the father of gay contestant Jeremiah Lloyd Harmon condemning gay rights as a sign of society’s downfall.

Harmon, the son of Rev. Jerry Harmon, has spoken candidly on the show about how his parents condemned him for coming out of the closet. The younger Harmon seemed to bridge the divide earlier this week when his parents showed up to his Idol performance of “Who Wants to Live Forever” and gave their son an on-camera ovation.

Now the newly surfaced video obtained by Queerty casts doubt on Rev. Harmon’s sincerity. The footage shows a sermon given in April 2019 by Rev. Harmon at Grace Bible Baptist Church called The Forgotten Attribute of God. Besides running well over 30 minutes (those poor congregants!), Harmon launches into a rant about how equality for LGBTQ people offends God.

Related: ‘American Idol’ contestant gets standing ovation from parents who disapproved of him being gay

“This is the sign of a society that God has turned over to itself,” he preaches. “Now we live in a society today where we are forced to accept this as normal, and if we don’t we are bigots. If we don’t, we hate. We don’t hate anybody friend…We are trying to point you to the only way to salvation, friend.” Harmon then had to pause for dispassionate applause.

Rev. Harmon then went on to talk about the only solution to society’s ills–homosexuality and abortion, natch–is the Gospel of Jesus.

We have to wonder here when the good Reverend last revisited the Gospels. Just to refresh: Jesus never spoke about homosexuality. Ever. He also never spoke about marriage, though he did disapprove of divorce. He did preach to “render unto Caesar that which is Caesar’s and render unto God that which is God’s;” in other words, encouraging separation of church and state. He also encouraged love and acceptance, which looks nothing like the venom Rev. Harmon spewed from his pulpit.

Queerty reached a former congregant of Rev. Harmon, Brandan Robertson, who is now an out-gay pastor himself. “Jeremiah was my peer in youth group and his dad was one of my pastors,” he told us.

“This kind of teaching locked me in a closet of shame and self-hatred for over a decade. I believed that God could never use me and was going to send me to hell based on something I didn’t choose and couldn’t change. All of this trauma stemmed from a faulty interpretation of a few verses in the Bible.

“But Jesus taught that true teaching would always “bear good fruit” and the way we could recognize false teachers was by the “fruit” or results of their preaching. If the results of your preaching is self-hatred, despair, and depression, it seems to me that we can be fairly certain that your teachings are not true and are not from God.

“After doing years of work to heal and reconcile my faith and sexuality, I now have the honor of being an openly gay pastor of my own church.

“In my congregation we hear stories every single day of how this kind of homophobic preaching has destroyed peoples lives, and I’m so grateful that I get to help people understand that the words of preachers like this are not Gods words, and that there is a place for them in affirming communities of faith like mine.

“But clearly there still a lot of work to be done. Churches like Dr. Harmon’s are still full of people who are being fed this toxic theology, and after hearing it they’re going and spewing it at their LGBT friends and family. We need to call this dangerous teaching out for what it is, and call the preachers and teachers of this kind to account for the harm that they’re doing to LGBT youth and LGBT people in their pews.”

Thankfully, the video, posted by Rev. Harmon himself has, at the time of this writing, only received 33 views. We have a feeling it may gain Harmon some attention…though probably not any converts.

Have a look for yourself. Rev. Harmon’s anti-gay comments begin around the 31-minute mark.