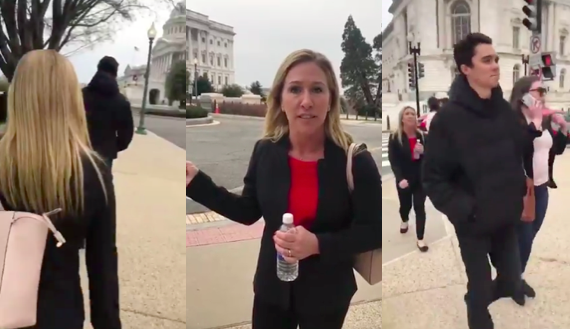 Newly unearthed video of Rep. Marjorie Taylor Greene hunting down Parkland school shooting survivor/teen activist David Hogg on the street to berate him about his views on gun control is currently making the rounds on social media, and it’s absolutely stomach-turning.

The disturbing video, which was taken before Greene was elected to Congress, was shared on Twitter by Fred Guttenberg, whose daughter was murdered in the shooting.

“@mtgreenee, is this you harassing @davidhogg111 weeks after the Parkland shooting, that my daughter was killed in & he was in?” Guttenberg wrote. “Calling him a coward for ignoring your insanity. I will answer all of your questions in person. Get ready to record again.”

.@mtgreenee, is this you harassing @davidhogg111 weeks after the Parkland shooting, that my daughter was killed in & he was in? Calling him a coward for ignoring your insanity. I will answer all of your questions in person. Get ready to record again.pic.twitter.com/aQjL74x7kh

In the video, Greene can be seen stalking Hogg, who was just 18 at the time, on the street and demanding to know, “Why are you supporting red-flag gun laws that attack our Second Amendment rights?” Then she accuses him of using kids “as a barrier” and tells him she has a concealed carry permit and carries a gun with her “for protection.” Then she falsely accuses him of being “paid” by George Soros.

The Parkland shooting happened on Valentine’s Day in 2018. Seventeen people, including 14 students, were killed. Greene has long been a denier of the tragedy, agreeing with conspiracy theorists who say it was some sort of inside job.

Last week, Media Matters for America shared an old Facebook post Greene wrote in 2018, sharing an article about the monthly pension given to the school resource deputy who failed to enter the school during the shooting, calling it “a pay off to keep his mouth shut since it was a false flag planned shooting.”

Since the video of Greene harassing Hogg resurfaced on Twitter, it has racked up millions of views and renewed calls for her to resign.

For the 8 millionth time

Could someone PLEASE tell me where the “millions” I’ve been “paid” by Soros is? I’d love to have the rest of college and if I go- grad or law school paid for, a nice place for my parents and therapy paid for the rest of my life

That was truly horrid to watch and im impressed how David Hogg kept his cool.

Just when I think Marjorie Taylor Greene can't get any scummier, I see the video of her harassing Parkland survivor David Hogg.

I need a shower every time I see that woman.

David Hogg made the right choice not to engage back then with crazy. The Parkland students and families turned a horrible tragedy into action and a national organization that didn’t give up.

I believe @mtgreenee may be clinically insane and unfit to be a congresswoman.

My, God. This lady chasing and harassing @davidhogg111 thru the streets of Capitol Hill is deeply disturbing and cookoo-crazy. This woman is a Member of Congress, paid by our tax-dollars. Republicans need to ask themselves, what the hell kind of Party elects this type of nut-job. https://t.co/9jjvV2uDUv

Telling David Hogg she has a gun while actively stalking him raises all my hackles.

Republicans call for “unity” but it gets drowned out by Marjorie Taylor Greene screaming at David Hogg, a high school student, days after he experienced a horrific school shooting. #ExpelMarjorieTaylorGreene

Do you think Marjorie Taylor Greene should be expelled from Congress? (Me: Absolutely, yes.)