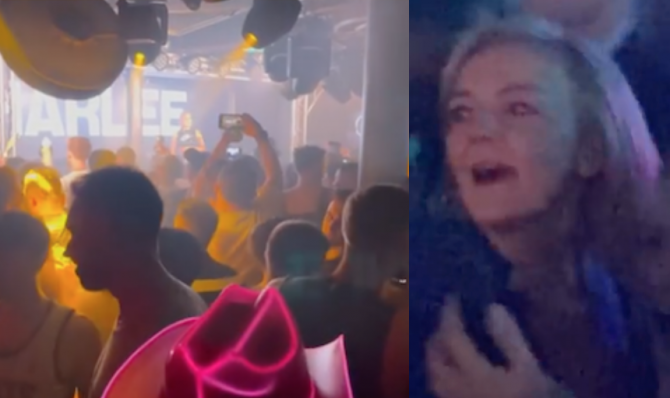 Scenes from a gay club in Manchester, UK played out like an episode of The Twilight Zone on Twitter as videos of anti-LGBTQ politician Liz Truss partying it up started making the rounds.

Truss has served as Foreign Secretary since 2021 and Minister for Women and Equalities since 2019. During her time in office, she has argued that trans people must be given invasive “medical checks” in order to be legally recognized. She insists that “only women have a cervix.”

Truss has heavily cut funding to women and equalities aid, and pressured the government to withdraw from the Stonewall Diversity Champions program, an organization that works to promote LGBTQ acceptance.

As you can imagine, people weren’t thrilled to see her knocking back Smirnoff Ice surrounded by dancing gays while Tina Turner’s “Simply the Best” coursed through the sound system.

Here she is! The Foreign Secretary @trussliz has arrived 🌳🍺 – LRB pic.twitter.com/gakf0emPjv

“Satire at its greatest,” one commented observed.

… and that goes for some of you aforementioned gays out last night. Your world would be diminished without the words and deeds of trans and gender-non conforming people. You owe them a share of your rights, the music you love and the night life scene you enjoy.

“Dear Liz Truss, prancing round to Whitney Houston surrounded by gay men is not the same thing as supporting trans rights,” tweeted Manchester drag queen Cheddar Gorgeous. “If you can’t be there when the most vulnerable members of our community need you to speak out you shouldn’t come to the after party.

“And that goes for some of you aforementioned gays out last night.

“Your world would be diminished without the words and deeds of trans and gender-non conforming people. You owe them a share of your rights, the music you love and the night life scene you enjoy.”

Here’s what people are saying:

Amazing what £183m in cuts to women and equalities aid gets you I guess.

Liz Truss at The Conservative LGB+ party last night singing "I need a hero" while drinking a smirnoff ice. pic.twitter.com/c3pCDQ3nVA