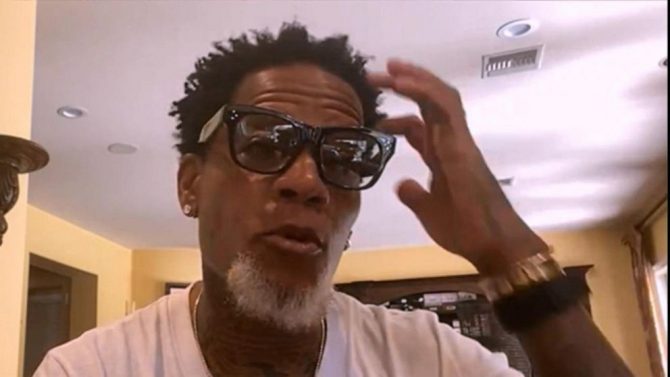 Another day, another vile string of homophobic tweets from comedian D.L. Hughley. This time, he’s obsessing over Andrew Gillum coming out.

The former Florida Democratic gubernatorial candidate came out as bisexual in an interview with Tamron Hall this week. It was Gillum’s first time speaking publicly since checking into rehab after being found by police in a Miami hotel room with a male escort who appeared to have OD’ed on crystal meth.

Yesterday, Hughley tweeted: “So when #ANDREWGILLUM came out as bi-sexual yesterday! Is that considered halfway outa the closest? #TeamDl”

Ah, yes, that tired old “joke” about how bisexuals aren’t real and that they all come out as gay eventually. (Also, not to nitpick, but there’s no hyphen in the word “bisexual.”)

The 57-year-old comedian’s tweet didn’t sit well with many of his 560K followers.

One person asked: “I don’t get the joke here!?! I commend him for finally speaking his truth!!” To which Hughley flippantly replied: “Yep after he was busted passed out naked in a hotel with a male escort and crystal meth! But besides that you’re right!”

Yep after he was busted passed out naked in a hotel with a male escort and crystal meth! But besides that you’re right!

Because drug addition and sex workers are, evidently, hilarious in Hughley’s narrow mind.

That’s when another person stepped in to say, “I think what we’re missing is, if there wasn’t the stigma of shame, closeted gay people could live their lives freely and they wouldn’t have to come to being FORCED out of the closet when their secret life is exposed. Not everyone is a James Baldwin.”

I think what we're missing is, if there wasn't the stigma of shame, closeted gay people could live their lives freely and they wouldn't have to come to being FORCED out of the closet when their secret life is exposed. Not everyone is a James Baldwin.

Many others also spoke out against Hughley’s blatantly homophobic tweet, condemning him for shaming a person for publicly coming out of the closet under extremely difficult circumstances.

Don’t make fun of him, this is why people stay in the closet

What does halfway out the closest mean? What kind of question is that to ask. He said what he is. Damn enough is never enough. He spoke his truth all the way out. Stupid!

Black men: We don’t need to attack that man’s sexuality (even in jest) to affirm our own masculinity. If we call ourselves agents for justice..this means securing “all” black folks right to exist in safe space. BE BETTER BROTHAS!!!

This is offensive. If you didn’t know. It is. If you need me to tell you why I will but I am super busy right now so I will have to do it later. xoxoxo

But this isn’t the first (or second… or third… or fourth…) time Hughley has expressed anti-LGBTQ sentiment on Twitter.

In 2018, he spoke in support of comedian Kevin Hart’s homophobic jokes and attacked trans actress Indya Moore when she called him out for using gay jokes in his comedy act.

And in 2019, he made fun of actor Terry Crews when he spoke out about being sexual assaulted by another man and criticized actor Malik Yoba for being into trans women, saying a man cannot be straight and attracted trans women at the same time.

Hmmm. Is it just us or does D.L. Hughley spend a lot of time thinking about other men having sex?