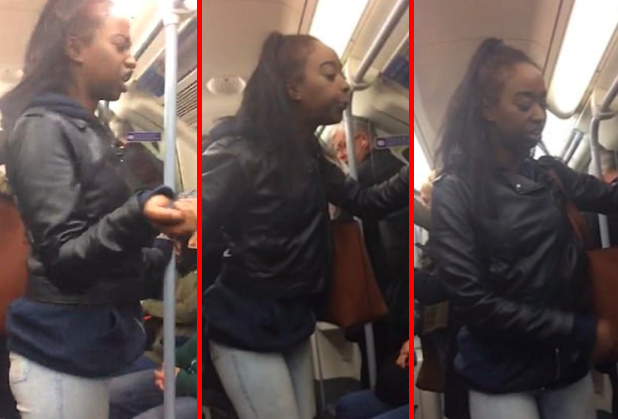 Disturbing video of a woman on a London Underground verbally assaulting a man “because he is gay” has been making the rounds online.

The incident happened Monday at around 5:30 a.m. at the start of the morning rush hour.

The clip was submitted to MailOnline by an anonymous tipster and shows the woman screaming homophobic abuse at a male passenger.

“Because you’re gay, even more I’m going to violate you!” the women, who appears to be intoxicated, shouts in the man’s face.

Then she tries grabbing the man’s phone and spits on him.

The tipster tells MailOnline that the woman became enraged “out of nowhere.”

“The man tried to ignore her but she was not leaving him alone, she tried touching his face and he was very patient to her, telling her to stop it, without being aggressive until she tried to grab his phone.”

The tipster continues, “He kicked her and then she spat on his face, the man was still very calm, other passengers gave him tissue to clean up his face and he was grateful for that.”

“After the spat, she tried to leave the carriage but a woman confronted her, telling her to stop abusing the man.”

“We take all reports very seriously and would ask anyone who witnessed what happened, or who has any information, to contact BTP.”