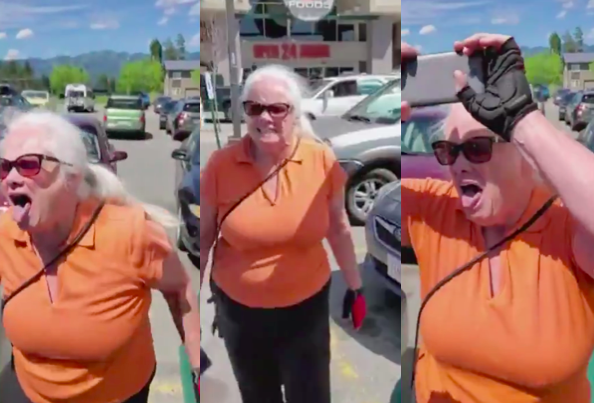 A woman got into a shouting match and coughed on a couple outside of a grocery story in Whitefish, Montana over a mask dispute.

The disturbing incident happened in the parking lot of a Super 1 grocery store over the weekend.

According to the couple, the woman was angry when another person confronted her about not wearing a mask. When they saw what was happening, they began recording. That’s when she turned her ire towards them.

In video captured by the couple, the woman, dressed in an orange shirt, red fingerless gloves, and silver tennis shoes, can be heard shouting, “Is this your car or don’t you have the balls to tell me?”

Related: After parking illegally, Karen unleashes on “punks” who “go on Grindr and do hookups”

She then charges at the couple while filming with her own cell phone, ignoring their pleas for her to stay away. She gets right up in their faces and violently coughs while hollering obscenities.

To which the irate woman replies, “You don’t go to jail for not wearing a mask, you moron!”

“You just coughed in my wife’s face,” the man says.

In April, Forbes reported that coronavirus is considered a “biological agent” in the United States, meaning people who deliberately cough on others to spread infection could potentially be charged with terrorism.

WATCH: A woman coughs on a man after allegedly being asked to wear a mask and keep social distance inside a Whitefish grocery store. The man tells us things escalated once they got outside. pic.twitter.com/eakteFeyXF

Is the movie version of ‘Rent’ an overlooked classic, or a dumpster fire?