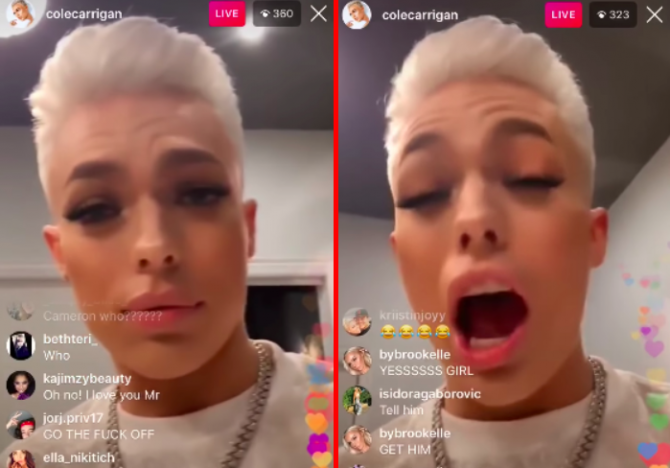 This just in: Beauty vlogger Cole Carrigan believes he is the victim of homophobia after fellow YouTube star Cameron Dallas allegedly threw a bottle of water on his designer pants at a house party over the weekend.

According to Carrigan, Dallas threw the bottle of water at him in an unprovoked attack. Naturally, Carrigan immediately whipped out his phone and began filming the aftermath.

“I’m in my own f*cking house and literally talking to my f*cking friend and f*cking ugly-ass Cameron Dallas is f*cking throwing water all over my f*cking pants like a piece of sh*t! So f*ck you!” he cries.

All the while, Dallas, holding a half-full bottle of water, looks back at Carrigan with a confused expression on his face.

so last night at a party i was outside talking to people minding my own business when @camerondallas decides to comes up to me and throw his water bottle all over me for absolutely no reason other than being a homophobic drunk asshole. i won’t tolerate that shit. pic.twitter.com/SXNNwgCajM

Carrigan later posted the video to Twitter, where he called Dallas a “homophobic drunk asshole,” though it’s unclear what Dallas actually did that inspired Carrigan to make such a charge.

“I have too much respect for myself to be silent about a situation that needs to be brought to everyone’s attention,” Carrigan tweeted.

He continued, “The kid was shook that I started recording him and froze up real f*cking quick. It’s 2019 if [you’re] still homophobic or insecure about your own sexuality so you have to take it out on people who are confident with theirs you’re TRASH.”

Later, Carrigan recounted the alleged incident in a video posted to his YouTube channel, where he again called Dallas a “homophobic piece of sh*t” without actually saying what he did that was homophobic.

Dallas hasn’t commented on the incident, but several other social media influencers who know him and who were at the party have come to his defense.

How is it okay to call people a bitch and say fuck you over a accident? and uploaded it straight to twitter for clout?! Cameron was so confused when this kid started filming him and didn’t want to take his phone or do anything because the kid was BEGGING for attention

He followed that up with two more tweets clarifying that he totally respects the LGBTQ community, but that he also feels the need to stick up for his friend who he says is being wrongfully accused.

I will stick up for my friends like i always do. Because i’m a friend. I could careless what people on the internet think of me it’s 2019.

Nothing but respect to the ? community. I understand many of you go through real life bullying because of your sexuality… and that’s not right. i want everyone thriving and happy with whom they are and whom they wanna be.

Meanwhile, rapper Deejay Rupp also spoke in Dallas’ defense, tweeting that it was a party and everyone was acting wild.

We have no idea what actually happened, but we feel obligated to say that throwing a bottle of water on someone at a house party on a Saturday night hardly constitutes a hate crime.