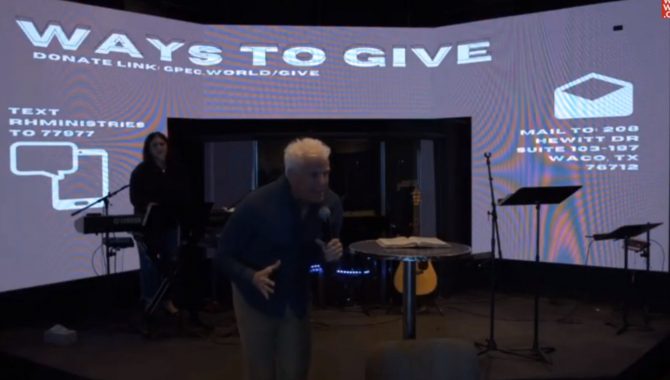 Pastor Robert Henderson of Radiant Church in Waco, Texas has gone viral after bragging to his congregation that “he attended a meeting with other conservative evangelicals in Washington last Monday where he prayed for control over the Supreme Court,” attempting to take indirect credit for the death of Justice Ruth Bader Ginsberg.

Right Wing Watch posted the video to its website. In it, Henderson tells his congregation: “We were in the meeting on Monday night in D.C., and I told them, I said, ‘Look, we need to go into the courts of Heaven right now while we’re on-site in D.C., and we need to shut the mouth of the lion, judicially. We need to ask for a judgment against the lion that has actually been devouring and intends to devour from the Supreme Court. We need to get a judgment against this lion that Paul said God shut the mouth of.’ So, I led us into that place. Well, guess what? Ruth Bader Ginsburg has passed away. President Trump will establish a new Supreme Court justice.”

From there, the preacher went on to defend his praying for the death of the beloved Supreme Court judge. His ever-predictable reason: abortion.

Of course, from there, Henderson wasted no time in asking his congregation for money via a giant LCD screen.

Henderson had previously taken credit for Trump’s 2016 victory through the power of prayer. He also once claimed that he would be Trump’s “spiritual running mate” during the 2020 election.

Robert, we look forward to defeating you in November.