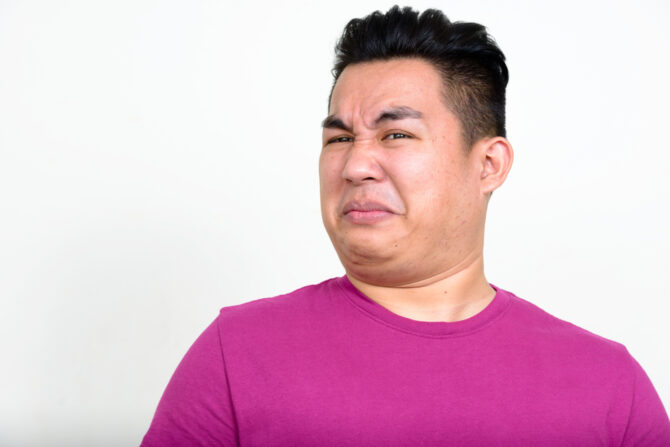 Some of the responses are hilariously harsh (like using Internet Explorer “out of choice”). Others are all too relatable and, in our book, questionably petty (like “judge-y people”).

We included some of the most interesting responses below, editing the comments for readability and leaving out the body-negative ones.

“Short texts/one-word answers for all messages.”

“Eating with mouth open. Or talking with a full mouth.”

“Broke up with a guy because he uses Internet Explorer out of choice.”

Related: What jobs are dealbreakers for a romantic connection? Guys say…

“Judge-y people. If you make a disparaging remark about the way someone dresses, how they walk, how they talk, it’s a dealbreaker. If someone is just trying to live their life and it doesn’t affect you in any way, but you still feel the need to make negative comments, I’m out.”

“Inability to be creative and critically think. It’s fun to create new things but also be able to be critical about your new ideas or other ideas you adopt.”

“[If I’m] being honest, smoking of any kind. Like, enjoy what you want, but I don’t feel the best connection when someone uses them.”

“Posing with a car that isn’t yours. Sh*t pieces me off, literally.”

“I can’t date anyone that avoids confrontation.”

“In a Tinder setting or quick-judgment-first-date setting, I’m not even going to bother with a Republican—just auto-goodbye. I’d have a long conversation with a Libertarian but probably not go on a second date with them, but it heavily depends on their answers. Auto-no for Republicans, though.”

“If they use the wrong ‘your/you’re.’ A while back, some guy said, ‘Your so adorable,’ and I blocked him.”

Related: Gay guys list the first-date behaviors that immediately turn them off

“Whether they expect me to like drag or Lady Gaga/Beyoncé/Name Your Gay Icon of Choice. I’m fine if you like them. Most guys I’ve dated have been into them. I just hate the assumption that, because I’m gay, I’m obligated to like them. If someone makes the ‘bad gay’ joke about me or accuses me of internalized homophobia because I’m not into them, I immediately lose interest.”

“I’m not proud of any of these, and I’m quite sure I’m missing out on quality connections because of my biases, but since you asked… 1. Men who say 1a) ‘irregardless’ 1b) ‘ATM machine,’ ‘PIN number,’ ‘For your FYI,’ et cetera, 2. Men with sculpted eyebrows, 3. Men who like Disney, and I mean, really like it, 4. Men who wear clothes or carry products that advertise a brand (think Louis Vuitton), 5. Men who don’t say please or thank you (e.g., ‘Give me a vodka tonic,’ vs. ‘Can I please have a vodka tonic?’), 6. Men who have messy rooms in the backgrounds of their profile pics, 7. Men whose profile pic includes posing with exotic or endangered animals (snakes, tigers, lions etc.), 8. Men who wear mom jeans with irony, ad infinitum…”

“I’m not into guys who have an artificial hair color (pink, green, blue, etc.). Also not a fan of guys who wear makeup. Having your nails painted is fine, though.”

“If they pass gas/burp without saying ‘Excuse me’…”

“He can’t have a sh*tty/generic taste in music. I’m sorry, lmao.”

“If he wears flip-flops everywhere.”