Actor Nico Tortorella features on the cover of this month’s Attitude magazine. Tortorella gives a candid interview in which they talk about bottom-shaming and their relationship with their wife, Bethany C Myers.

The gender-fluid 32-year-old, who also identifies as sexually-fluid, uses they/them pronouns. Besides roles in Scream 4 and TV show Younger, Tortorella features in new horror series, The Walking Dead: World Beyond.

Related: Nico Tortorella sometimes tops and sometimes bottoms “depending on the day”

“I think that is a deep-rooted issue with the body in general, whether you’re male-bodied or female-bodied.

“But I think specifically for men to be put in this ‘sub-position’ is not masculine, when anyone who’s bottomed ever knows you need to man the f*** up to get the job done.

“So I don’t think there’s anything more masculine than bottoming, let’s be honest.”

As a model and actor, Tortorella has been a highly visible advocate for sexual and gender fluidity. This has led to curiosity and speculation over their polyamorous relationship with their wife, Myers. The pair first met in college around 15 years ago and married in 2018.

Tortorella said despite being raised in a “very sex-positive house”, realizing their own sexual identity was a “slow-burn”. They had a major relationship with a man in their mid-twenties, which led to them coming out to their family as not straight.

Ultimately, Tortorella cherished the relationship they had with Myers.

“We started this lifelong journey of a friendship first. I mean, Bethany’s my best friend and we have been through a ton of shit together … [Bethany and I] really saw each other … There was this loyalty that never went away, no matter how far apart we were.”

Tortorella was then asked if they encounter common misconceptions about their relationship with Myers. Tortorella said the most common was: “That we’re out here fucking all the time and we have all of these other partners. No, that’s not the case.”

Tortorella said the pair were not “swingers” and did not date other couples.

“I think both of those words, queer and polyamorous, are heavily weighted, and they mean different things to different people. And what they mean to us works for us. And sometimes it doesn’t.”

I have nothing much to say in this post except i love this pic and this human. @nicotortorella

Tortorella says they and Myers are thinking of having children, and will continue to talk publicly about their love for another and their relationship.

“We don’t have all the answers, but we’re going to figure it out. I’m sure other people will try to give us unsolicited advice on a regular basis.”

Read the whole interview in the November issue of Attitude magazine. 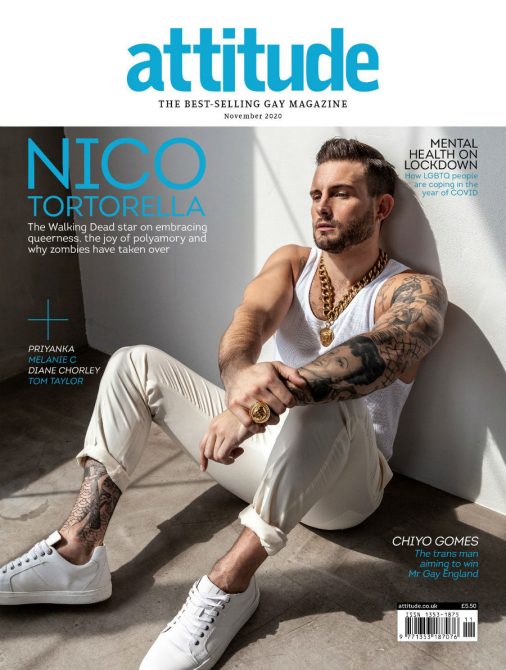