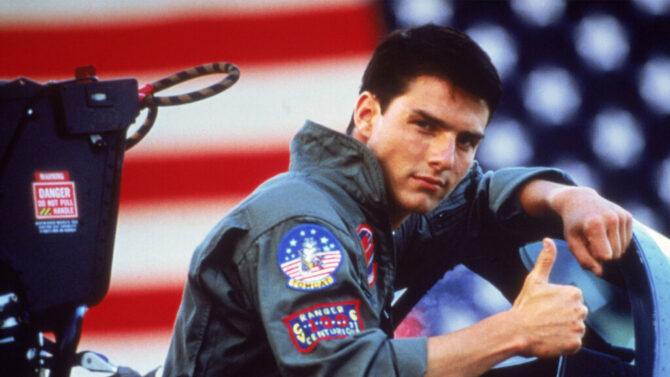 It’s been nearly 36 years since Top Gun first took flight. Essentially a recruitment ad for the Navy disguised as an action flick, the Tony Scott-directed film is remembered for ushering in a new age of blockbuster spectacle and solidifying Tom Cruise’s ascent to movie stardom. It’s also remembered for being pretty gay.

Related: 9 genuine reactions I had while watching ‘Basic Instinct’ for the first time ever

Even if you’ve never seen it, you’re probably aware of the scene where a shirtless Cruise, Val Kilmer, and their hunky colleagues play beach volleyball, their well-oiled muscles shimmering in the hot afternoon sun. The camera ogles their hard bodies to the point that many have read the entire film as a queer allegory (including, famously, Quentin Tarantino).

But how gay is Top Gun, really? With its belated and long-delayed sequel, Top Gun: Maverick, hitting theaters, it was the perfect time to revisit this era-defining emblem of male bravado and homosocial relationships.

Related: All the hidden (and not so hidden) gay culture happening within the ‘Scream’ universe

We’ve gone ahead and listed the scenes you should skip to if you only care about the movie’s gay moments—the campy, the subtextually queer, and the overtly homoerotic. In other words, this is Top Gun: Just The Gay Stuff…

It’s an exposition dump as Commander Stinger (James Tolkan) assigns Maverick (Cruise) and bestie Goose (Anthony Edwards) to elite TOPGUN fighter pilot training, establishing our heroes as ride-or-die for each other. While there’s nothing overtly gay, it does feature the line, “I’d like to bust your butt, but I can’t,” and Stinger chomping on a cigar—phallic much? We’re also introduced to two of Top Gun’s favorite homoerotic motifs: Copious amounts of sweat, and men talking to one another while their faces are centimeters apart.

On day one of training, the boys get riled up by all the technical talk (“This gives me a hard-on.” “Don’t tease me!”), and we’re treated to a number of knowing glances and sexy smirks as they size up their fellow pilots. There’s an undeniable charge when Maverick locks eyes with soon-to-be frenemy Iceman (Kilmer at peak hotness), the two immediately realizing they’ll be in stiff competition to decide who gets to be the top… TOPGUN that is, the prestigious honor bestowed to the best in class.

Maverick spots Charlie (Kelly McGillis) at the bar and decides to woo her with some karaoke to “You’ve Lost That Loving Feeling.” Sure, this is your standard hetero mating ritual, but by the time Goose and the others join in, it’s clear these pilots are all musical theater gays at heart.

We see some taut torso and suggestively splayed thighs as the guys talk “hard decks” and grandstand about the day’s test flight. There’s a brief tête-à-tête from Maverick and Iceman, their faces practically touching as they tease one another, the latter even flashing a quick chomp of the teeth that’s unfortunately super hot.

And the honor for gayest line of the whole movie goes to: “I want somebody’s butt, and I want it now!,” which Air Boss Johnson (Duke Stroud) barks as he bumps into a subordinate in a dandy sailor’s outfit.

After a tough day of training, Goose swings by Maverick’s place—the moody lighting and extremely ‘80s score giving off the vibe of a clandestine meeting between lovers. The sexual tension dissipates when Maverick tells Goose, “You’re the only family I’ve got,” but it does add credence to the reading of Top Gun as a queer metaphor, reminding us that these two are “chosen family.”

It’s the film’s pièce de résistance, the minute-and-a-half-long beach volleyball montage that’s sent gay viewers’ imaginations running wild for over three decades. The sequence opens with a close-up of Iceman’s glistening back and doesn’t let up from there, shot after shot of oiled muscles, sweaty armpits, and tight, butt-hugging denim. After every point scored, Maverick and Goose go in for a friendly low-five, daring you to imagine them slapping one another’s butts. And, to top it all off, it’s soundtracked by a Kenny Loggins jam called “Playing With The Boys” (yes, really).

It’s our introduction to Goose’s wife, Carole, played by the great Meg Ryan in her first feature film role! Sure, she’s straight, but Ryan is the queen of the rom-com and has given the gays so much, so I have to shout her out every time she’s on screen.

Yet another moment that’s not technically gay, but the aesthetics of the big sex scene between Maverick and Charlie are off-the-charts camp, looking like a proper Celine Dion music video as the curtains billow behind the silhouettes of the two lovers. Major credit to late director Tony Scott (he always brought a stylish eye to popcorn entertainment), who bathes his actors in the blue moonlight and gives the steamy makeout session some real panache. We’re also treated to the melodrama of Berlin’s power-ballad, “Take My Breath Away” written by Giorgio Moroder, which earned the film its one Academy Award.

By the time the second locker room scene rolls around, I have no idea what these guys are even frustrated about, but I sure am glad they decided to let a little steam off while wearing nothing but thin white towels that hang delicately on their hips.

Meg Ryan alert, Meg Ryan alert! She’s such a spark of life in this bar scene, the only to feature dialogue between two women and yet another musical number from the guys. Plus, Ryan gets to utter one of Top Gun’s most iconic/horniest lines: “Hey Goose, ya big stud! Take me to bed or lose me forever.”

It’s at this point that Top Gun gets a little too maudlin for my tastes. Goose has died in a training accident that should’ve been avoidable and, naturally, Maverick is a mess. As he grieves over the sink in a tight pair of briefs, Maverick’s firm glutes are on full display, and suddenly I’m forgetting what we’re supposed to be sad about.

Our final Meg Ryan sighting! Obviously, Carole is a wreck over Goose’s death, too, and Ryan really delivers the emotion here. An icon in the making.

You may have noticed I skipped a significant chunk of the movie, and that’s because the final act is sorely lacking in gay stuff, largely made up of Maverick grieving some more, and then a climactic air fight that was, honestly, over my head (pun intended, I guess?). But, importantly, Maverick saved Iceman’s life in a pinch, and this is the point where the two realize they’re good for each other. The culmination of the homoerotic tension between them comes when Iceman says, “You can be my wingman any time,” and Maverick responds with “Bullshit, you can be mine,” and they enthusiastically embrace. The real last shot of the movie is a romantic one between Maverick and Charlie, but that feels like a coda to the wingman moment, proving the relationship that Top Gun really wants you to invest in is the one between these two men.

Top Gun streams on Paramount+, Netflix, and is available to rent/buy on Amazon Prime, iTunes, & VUDU.