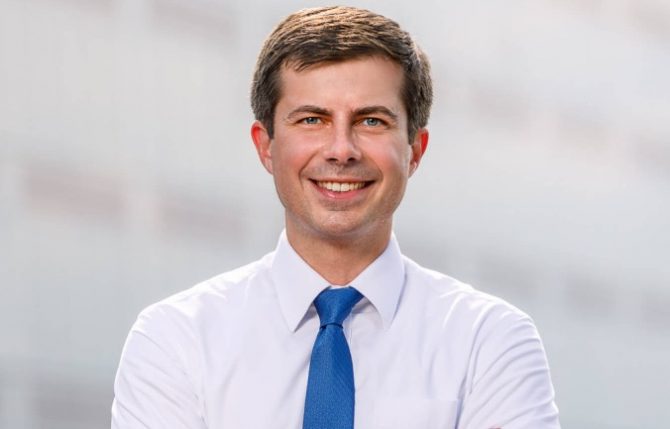 The name on everybody’s lips in politics right now is… Pete Bootigedge. No. Pete Beutigeg. No. Pete Buttajeej.

There’s even a Washington Post video dedicated to news anchors botching it:

NY Mag’s The Cut offered this handy lesson for all the visual learners among us:

His last name, Buttigieg, it IS NOT PRONOUNCED:

But no matter how his name is coming off people’s lips, there’s one undeniable fact — it’s coming off their fingertips even more.

In the first chart, you see how very crowded the race is right now. The second shows how gay South Bend mayor Pete Buddha-judge has spiked in web searches.

Here you can see how @PeteButtigieg has risen in search interest this year.https://t.co/yaz7Sm5f8g pic.twitter.com/78pxqB7TkJ

This certainly jives with the anecdotal buzz we’ve been seeing around Boot-a-judge.

And that has translated into dollar bills. In his first quarter of running for president, the until-now unknown mayor has raised an impressive $7 million.

“This is a big number for us,” Buttigieg wrote to supporters in an email. “We are not part of the national political machine. We started with just about 20,000 people on our email list, and not many people even knew who I was.”

The more voters get acquainted with Buttigieg, the more they seem to like his refreshing candor and intellectual approach to the issues. In other words, the exact opposite of what we have now.

The same affection goes for his husband, Chasten, whose somewhat sassy Twitter page has become a source of endless delight.

True to form, Chasten had a solid response to the Google trend charts, conjuring Miley Cyrus:

Ever since I saw that @GoogleTrends gif of @PeteButtigieg surging in 2020 searches I’ve had Miley’s “The Climb” stuck in my head. #ICanAlmostSeeIt

In a political climate that often has us searching for the nearest sand hill to bury our heads in, we can definitely get into following the Buttigiegs on whatever path their destinies lie.